Neoarchaic.net has just been overhauled with a new, easier to navigate, layout and reworked and introduced a series of new resources. In addition to a site overhaul all grasshopper components whose functions have not been made obsolete by subsequent grasshopper updates have been revised and improved to maximize ease of use, speed, and integration. Each grasshopper tool now includes a user object version which integrates into the appropriate existing category in basic grasshopper, as well as a grasshopper sample file with the component and a demonstration of use. All components include tooltip and component descriptions for ease of use.

While this section was previously a series of experiments whose solutions were not always the most effective, the new revised components are developed as utilities built around a goal to use the most efficient solution and use workflow. This section should be regularly updated with simple components designed to enhance productivity in grasshopper as well as offer new utilities. 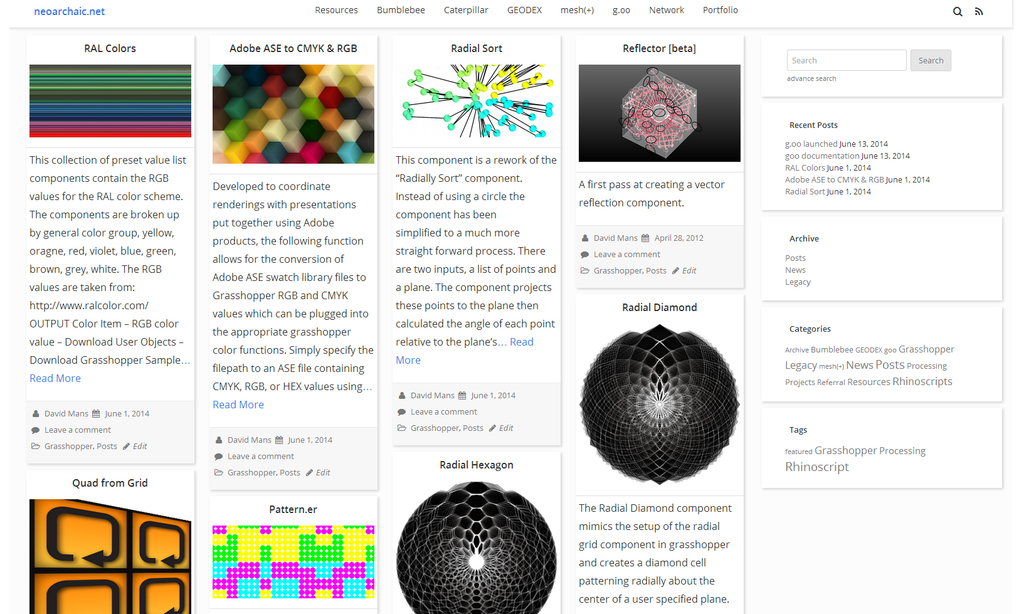 As part of the relaunch, the open office interop toolset has been rebuilt from the ground up based on the workflow from Bumblebee.

This new small project, g.oo, includes components for the transfer of data and formatting from grasshopper to cells in an open office spreadsheet as well as the creation of charts.

Dear David!
The links on GEODEX or either other files do not work. Is it possible to upload them on some other archive location? Thanks in advance!

Ive heard this from some other user's today.

Can you tell me what tool you are having this issue with.

I have problems to download anything. is it just me, or does someone else have that problem. it gives me always an error. I tied it with differnt browsern and differnt PCs....

Nice work as usual. Looking forward to give it a try.

great work. thanks a lot!

it would be nice to have an image of each sample file definition to be able to see the result before deciding if i want to download and install the new component.