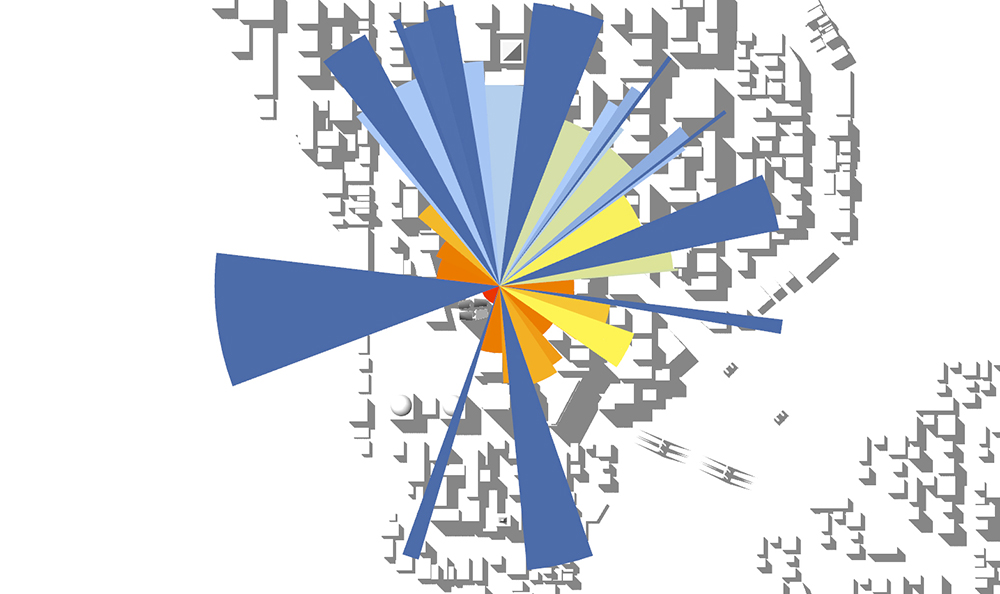 This view analysis component takes a user specified visual plane, field of view angle, and distance limit to test for view obstruction from input meshes. The result is a returned percent of unobstructed views and a series of view cones with associated distanced and angles which show the extents of visibility from a given location.

The first pre release of Parrot is now available for download at the group:

Development of the .dll library and the .GHA plugin are underway now.

However I felt releasing the user object collection would allow for feedback about the direction the plugin should go, what is and isnt working, etc. So please let me know any thoughts you have on Parrot at the…

The WIP release of mesh+ 2.0 is now available for download here.

This release is a complete overhaul of all components and introduces a large range of new functionality. Please report any bugs, issues, etc. on the grasshopper project page.

In addtion to updates to all previous components, new major additions include

Neoarchaic.net has just been overhauled with a new, easier to navigate, layout and reworked and introduced a series of new resources. We are proud to announce the beta release of Bumblebee 2.0.

This has been a complete overhaul of the component set under the hood and features not only several new component types, including the introduction of "SmartArt" objects and Pictures, but also a major effort to clean up, simplify, and unify the interface for maximum ease of use. The goal was from the simplest…

Some images from the latest release version of Mesh(+) which includes vertex and by face coloring.…

Bumblebee version 1.05 is now available for download. The release includes a significant change to the component workflow as well as increased documentation. Tooltip descriptions have now been added to all the components inputs and outputs to simplify use. All components with Origin, Bound, and Location inputs now use point's instead of domain inputs. The (Z) parameter of the point specifies the sheet index where the data is to be sent and a…

This update to mesh(+) is a minor update, adding 4 new components to the modify category.

- FaceSubD: Subdivides a mesh based on each face’s center

- EdgeSubD: Subdivides a mesh based on the midpoints of each edge…

This update to mesh(+) is a revision of the Volume Based Mesh and Modify categories which introduces list inputs for controlling vertex and face based variables on the input meshes.

- For Mesh Volume Based components all (d) and (t) values allow a list of variable to be passed which correspond to the vertex index of the input mesh. Single inputs can also be provided and lists of variables that are shorter than the vertex list will simply repeat the last value in the series for each…

This update to mesh(+) is a revision of the Face Effects and Face Subdivide categories which introduces list inputs for controlling face and vertex based variables on the input meshes.

- For Face Effects components all (c,s,d,t) values allow a list of variable to be passed which correspond to…

A major update to mesh(+) adding a new expand category which allows for the creation of triply periodic surfaces as well as several new components for expanding mesh faces, creating woven meshes and analyzing angles.

Additionally, several components have been updated and errors corrected as well as unifying all outputs with common face normal directions when possible.…

The resolution is pretty amazing, cant wait to get mine.

Several updates have been made to mesh(+) to increase allowance of component interchanging, repair a few errors, and introduce several new components and a new category which includes mesh face bridging.

-version 1_02 introduces new nGon components which duplicate the functionality of the mesh face Subdivide and mesh face Effect components, but allow for vertex inputs of more that 4 points. Inputs are a list of points which should…

Mesh(+) is a set of user components…

Caterpillar is a collection of Grasshopper User Objects which allow for the conversion between different systems of measurement. Designed for simplicity of use, the primary conversion all takes place in a… We are pleased to announce the Beta Release of Bumblebee for Grasshopper.

Bumblebee is a set of User Objects which create a link to Microsoft Excel allowing access and customization of many of its features through Grasshopper.

A new update to the Excel-Grasshopper Suite is available for download at:

Version 0-05 has introduced two major changes in addition to a few general cleanups of the interface and internal workflow.

During the production of presentations, a constant need to select/ coordinate project color scheme's has made Kuler a great aid.  The problem has been that this worked amazingly for Adobe products, but not for anything else.  To meet this need, I developed a simple VB script for Grasshopper that reads through the ASE files and extracts the HEX, RGB, and CMYK values and deceminates them to coordinated C, M, Y, K, R, G, B values lists.…