Turtle is a open-source library containing a definition of an ngon face-vertex mesh. This is most probably the most basic mesh representation, and it is the same as the one used by Rhino, with the exception that this representation fully supports ngons, or faces with an arbitrary number of sides.

This is distributed for free under the terms of the GNU Lesser Public License (the repository can be found here). The source code is on Github, already there for you to download. This addon automatically converts Rhino meshes and closed polygons, and possibilities to Join and Explode meshes are available.

It can be used without any need to know programming.

To fully support ngon meshes, serialization is readily available, yey! It loads and saves vertices and faces in the very-interoperable .obj file format. Right now only vertices and faces are stored, but in the future also vertex and face normals will be stored, and more. TurtleMeshes can be already "internalized" in Gh files, making them simple to use and exchange.

Preview works directly and users can see their ngon mesh as though they were native.

The goal of this library is to be as open as possible, and be as interchangeable as possible. It uses interfaces all the time, so you can write your own implementation and even leverage the custom parameter functionality for storage and preview. It will also be made compatible with the next coming version of Weavebird and I hope MeshEdit, Kangaroo, Karamba, Starling, and hopefully any further add-on using meshes will follow (if your addon is not here, just please let me know). When source code will be available, I will make it compatible also with Plankton and any other mesh representation that should come up. :)

I want to thank the community of Rhino and Grasshopper users for the continued support, and in particular, Kristoffer Josefsson, Harri Lewis, Daniel Piker, David Rutten, Dave Stasiuk and Mateusz Zwierzycki.

Hi, I want to transform any panel extrusions to solids and group them according to their volume or id. However, extruded planes on given surface are seperated and I do not know how to combine them in…Continue

Hi Pac,I'd like to use Python with Turtle.dll and Plankton.dll. Could you please explain how to get to a plankton mesh from a selection of closed polylines. I realize it's not much, but this is what…Continue

Hi Piac,I'm not quite familiar with this component and could you please explain a little bit? Thank you very much...Continue

Hi all,This is the second release of Turtle, v1.2Here is the list of enhancements:-…Continue

Started by Giulio Piacentino. Last reply by Will Pearson Aug 6, 2013.

You need to be a member of Turtle to add comments!

Giulio, this appears when I open GH:

Message: Could not load file or assembly 'Turtle, Version=1.2.0.0, Culture=neutral, PublicKeyToken=1591915af8a60d0e' or one of its dependencies. The system cannot find the file specified.

I hope this means something to you.

I've downloaded Turtle v2 and have installed the assembly and dll in the components library. I've also unblocked them, but nothing appears on my toolbar after bringing Rhino and GH back up. What am I missing?

this plugin is open for everybody to contribute, and its copyright is even attributed to whoever publishes into it! Please feel free to add this feature if you want.

Here is one way to do what you would want, with a cluster, otherwise, feel free to add a new component to Turtle to do this!

Your plugin is very interesting.

It is possible to add an update with Compoment "To Obj Text", or a parameter for file of path.

Also, it would be interesting to generate a obj file each parameter change. 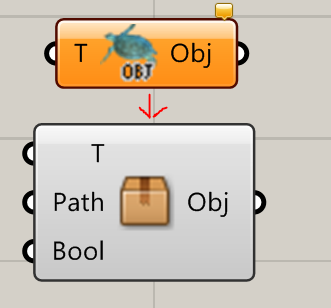 B: boolean for update or copy

What do you think?

A new release of Turtle with better ngon support is now available!

Mateusz and a couple other people suggested some bugfixes and features, and I've implemented the ones that were directly fitting or had larger impact on usage of the library. This contains also the Open... and Save... as double-click feature and the support for bounding box, morphing, and transforms.

thank you giulio, your the mesh master!

Great work, with the best for you piac

Great! thanks a lot!!