Just reporting back from Smart Geometry 2011 where I can verify that at least 7/10 clusters were actively applying Grasshopper into their work.  I can imagine that the rest of the clusters also made use of, but I did not see it directly.  Also on the horizon, GC will have a VPL soon, as reported by Makai Smith of Bentley.

It was nice to meet Andy Payne, Robert Cervellione, and many others from this GH Community whom I had not met face to face.

In our cluster, Urban Feeds, we tested new gHowl GPS components (to be released soon) and they worked quite well for most situations.

One more thing to note, Ben Van Berkel named Grasshopper 4 times during his talk.  Sometimes referring to 'this was before Grasshopper' and references to the application of Grasshopper in masterplanning in China.  Interesting...

Permalink Reply by Ángel Linares on April 4, 2011 at 8:01am
Hehehehe, nice concept: Architecture BG. and Architecture AG. ...AC. or BC. is not relevant in XXI century architecture :D

And for your amusement, this was day 1 of the Grasshopper Era: 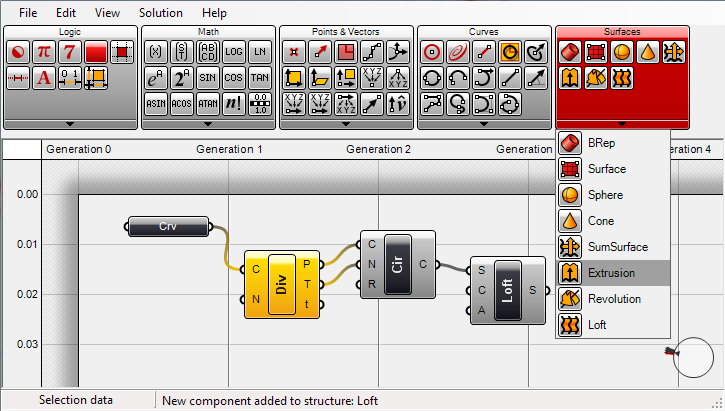 I also attached the actual plugin (it doesn't conflict with Grasshopper at all, different plug-in ID)

That date is when I first showed it to Bob and the coding team in Seattle. It was a bit of a secret project before then, only known to the Finnish office (where I worked at the time). I think it got released to the public relatively soon afterwards.

Permalink Reply by Luis Fraguada on April 4, 2011 at 10:50am
I like to show people these 'old' versions when they are starting out in GH.

Wow, I'm just seeing this post now but my how times have changed...

I think this EH version predates my existence by at least half a year.

Nice to see this, remember me the first steps with Explicit History and the old googlr group :) I remember first guys there and how exciting was that: a great step forward democratizing generative and parametric modelling.