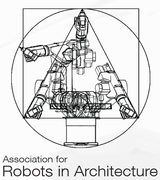 ROB|ARCH has been initiated by the Association for Robots in Architecture as a new conference series on the use of robotic fabrication in architecture, art, and design, closely linking industry with cutting-edge research institutions. In December 2012 the conference was hosted by its founders in Vienna, Austria.

In 2014 the conference travels to North America, hosted by the University of Michigan Taubman College of Architecture and Urban Planning.Continuing with the previous theme of collaboration, the conference seeks to bring togeth artists, designers, fabricators and industry leaders for the purpose of advancing the discourse surrounding robotic fabrication. Following on the success of ROB|ARCH 2012, the conference will again present a series of workshops held at select research institutions on the east coast of the United States, aimed at exposing the advanced capabilities of applied robotic research.Following the workshops, the conference will span two days at the University of Michigan Campus in Ann Arbor, Michigan, about an hour outside of Detroit, the origin of robotics in NorthAmerica. The internationally renowned publishing house Springer Wien/New York will publish and market the proceedings of the conference worldwide.

Robots in Architecture, Art, and Design
Industrial robots are the ultimate flexible manufacturing tools. Designers are taking this to heart;contemporary research and production via robotic fabrication borrows from more mature manufacturing industries in order to accelerate the translation from “design to production”. Whereas task-specific machine tools support the efficiencies of mass-production, robotic workcells can be reconfigured, allowing a generic machine to perform a wide range oftasks. What robots may lack in extreme precision, they rapidly recover in “intelligence”….cooperative, closed-loop production cells now learn and adjust their technique in real-time. At the other end of the scale, robots are emerging as in-situ construction tools, achieving the dexterity to perform an active role in direct, on site fabrication challenges.

The FABLab at the Taubman College is a recognized leader in architectural fabrication research, specifically with large scale automation and CNC equipment. Building on 4 years of work with robotic equipment, the Lab recently expanded to increase the availability and scope of its resources. For the ROB|ARCH conference the Lab will host 4 separate workshops, including a cooperative workcell with 2x Kr120 HA robots on linear axes, 2x Agilus Kr6 robots, 1x KR100HAL90 robot, and an additional space for a workshop specific, multi-robot workcell. Additional workshops will be hosted at select peer institutions nearby.