After some rework of a previous script (http://www.grasshopper3d.com/forum/topics/smooth-junction-blend-a-m...) to make node, here is a component to create node to join struts. It generates surfaces which blend sections of struts .

22/12/2015:  Please consider it as WIP. Comments are welcome. As I have more comments when it works, it is also good to know if by chance it works for some people . Please unblock if it didn't work. Install it through Grasshopper (just put gha on the canvas ans GH will place it at the good place). 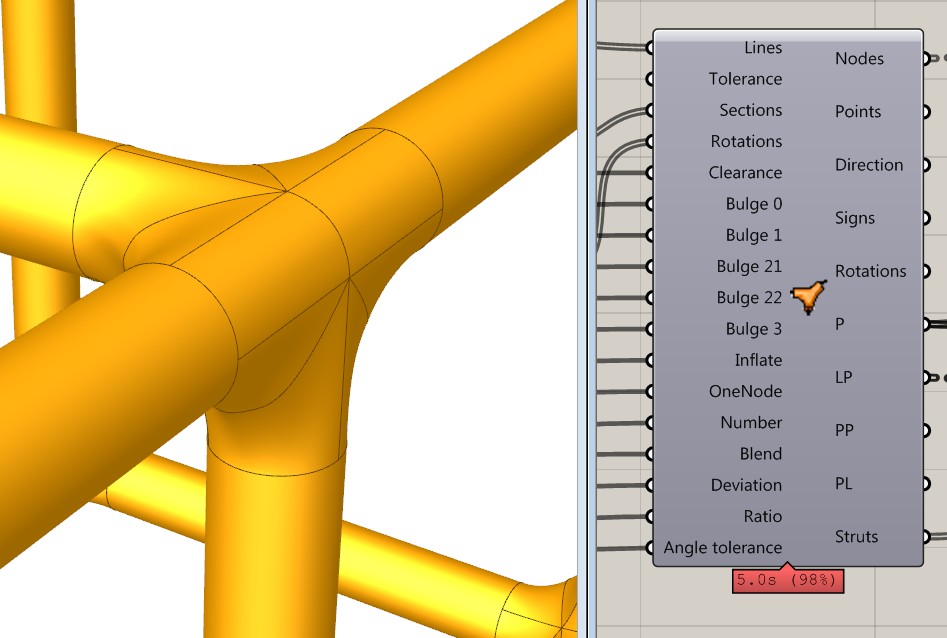 In order to work, this component needs 2 main things (underlined) :

1) Lines => lines (not generic curves) create the network, the intersection of lines are the position of the node. You must remove duplicates lines. I didn't put the option in the component. Some good components exist to do that.

3) Sections => they are the sections of struts, they must be planar on YZ plane. Zero must be inside the closed curve. You may provide one section for each line. If not the component will duplicate the last section.

4) Rotations (radians) => they are used to rotate the sections. By default it is 0. If you provide enough rotations you can turn all the section independently.

12) OneNode (bool) : used to calculate one node if true, all nodes if false. If true it is faster to make modifications and you can adapt modification to your node

13) Number (int) : The node number to calculate if OneNode is true

15) Deviation (0 to 1) : "Relative deviation of points from a plane
16) Ratio  (0 to 1)  For two triangles to be considered the ratio of the resulting quad's diagonals (length of the shortest diagonal)/(length of longest diagonal) has to be >= minimumDiagonalLengthRatio, 0.875 by default
17) Angle tolerance (radians): Used to compare adjacent triangles face normals. For two triangles to be considered, the angle between their face normals has to be <= angleToleranceRadians by default 0.00314

15,16,17 parameter are used to transform triangular mesh to quadrangle and Ngon mesh.

1) Nodes : BREP surfaces of the nodes, not closed

2) Points : Coordinate of the connection between node and struts

6 to 9) are the topology of lines, equivalent to SandBox

10) Struts : open surface of the struts

Soon some explanation of ngon mesh, when I finish the implementation.

Component for blending curves. At the moment this component blends curves but it needs connecting lines. So I will try do one in which you just need to feed with closed curves and the component will connect them.

Jacek Jaskólski for the idea "I'd love to see a generic solution for a smooth junction/blend between arbitrary shapes meeting at arbitrary angles... :"

peter fotiadis and Charles Fried for their numerous discussions on the subject.

Aidan K for making Intrallattice and putting it on Github, when clean I also hope to put the component on Github.

Mateusz Zwierzycki for Incremental convex hull, I think I will do my own convex hull as I need face with more than 4 vertices but also faces with 2 vertices !

And many others David Rutten for its superb tool, Mc Neel ...

hey where can i get the latest build and the component?

i will try and i need this

Comment by Laurent DELRIEU on August 17, 2016 at 4:44am
I will no more put a link for download. The script is not enough robust and people just complains and nether say if the component work.

Can you be more specific please ? I will be happy to find the good parameter for the compilation and also to give the good advices to install the plugin (.NET, windows ...). I use no specific library so I must omit something. But as I have just one laptop it is hard to test on other systems.

this plugin it's not working in my system like other pepole.