End of February 2017, McNeel published the webinar about the design and fabrication of the Morpheus Hotel and Tower in Macau. https://discourse.mcneel.com/t/morpheus-hotel-webinar-video-now-ava.... The video is on Vimeo https://vimeo.com/203358399.

There are also many other sources:

and many papers, I used mainly the first one:

Using this documentation here are some explanations of how I did the images here: 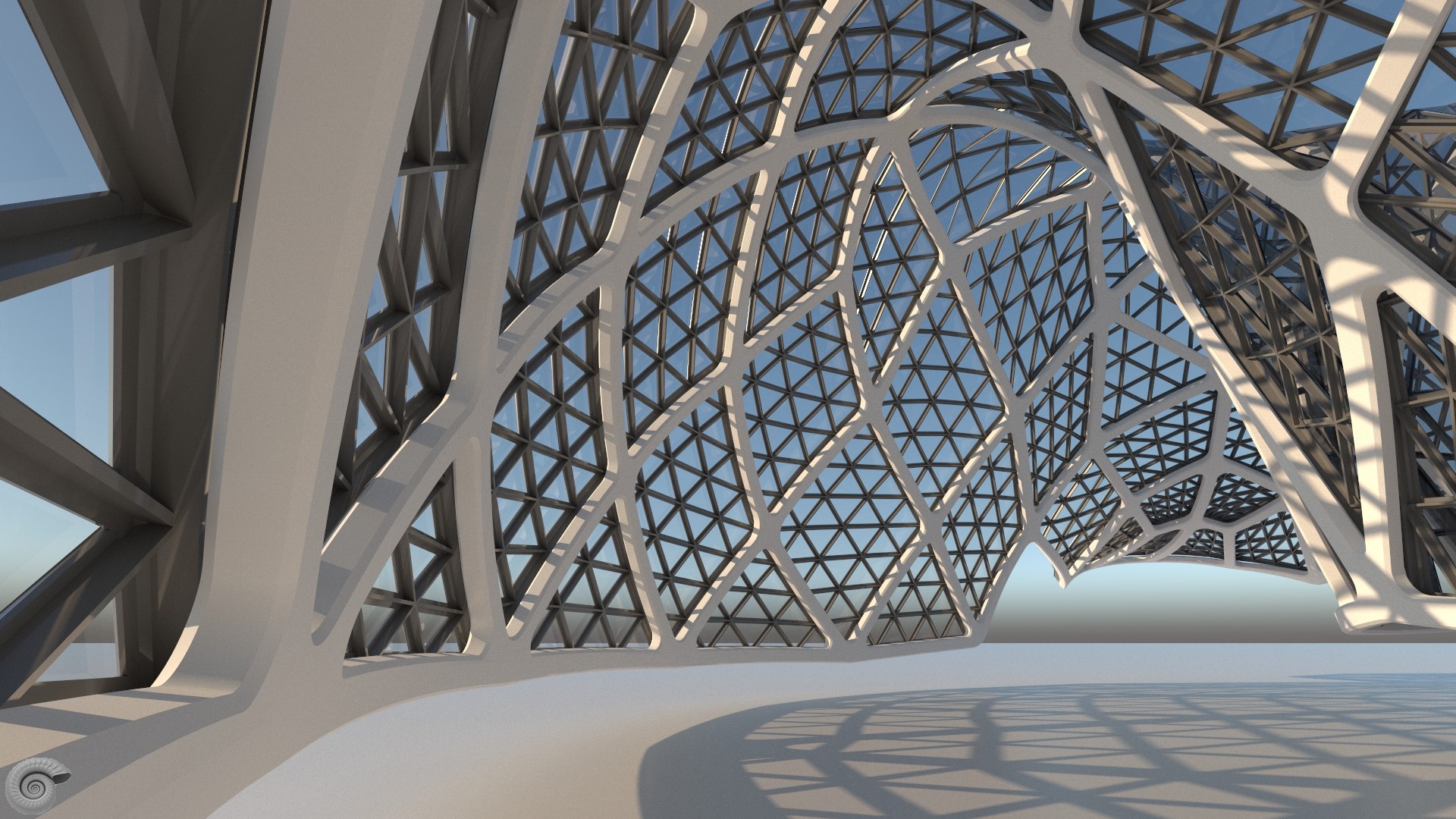 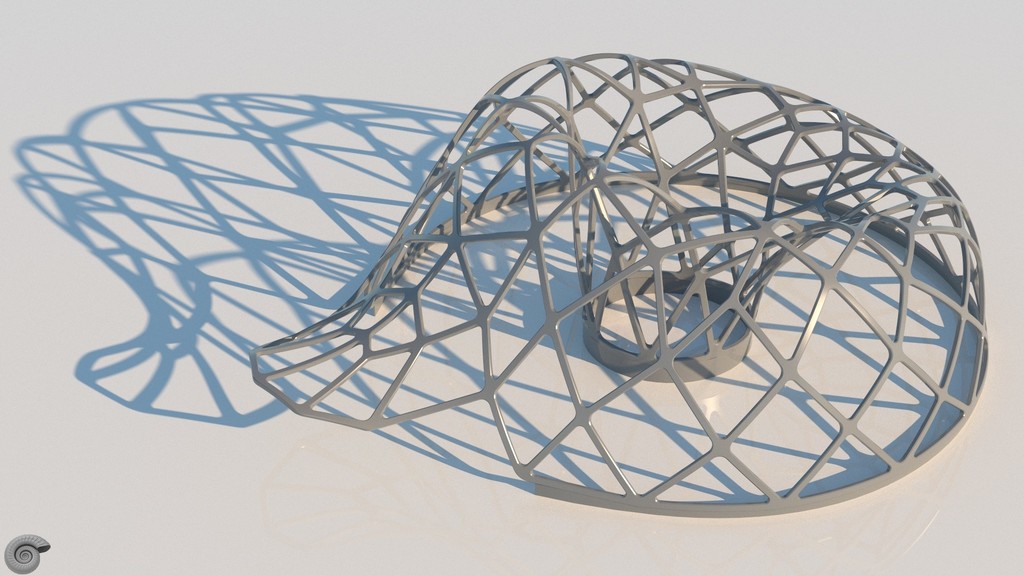 I began with a rough mesh which is then transformed in polysurfaces using SubDFromMesh (creases=No Output=Nurbs …) command. These polysurfaces are joined in one polysurface then offseted 4 times in order to have the control surface for the upper and lower level of the Exoskeleton. 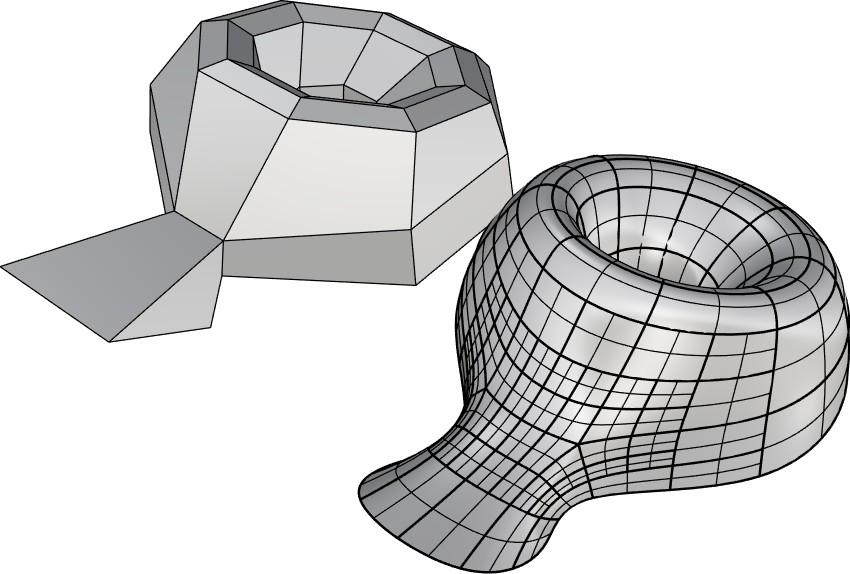 The position of the offset surface is represented below.

On this reference surface a mesh is build, each vertices will become a node of the Exoskeleton and each edge will become a member. I wanted to do everything in Rhino WIP but unfortunately as Ngon mesh were introduced there are still some incompatibilities with Grasshopper components. For me, it was a problem with mesh edges component.   As I have non planar quad Rhino WIP transformed then in triangles for the rendering (as usual) but also for the mesh representation (see there for some explanations ”(ngon) Mesh Edges” https://discourse.mcneel.com/t/ngon-mesh-edges/42436/8) . So I finished by going back to Rhino 5.0. The problem with Rhino 5.0/GH 0.9 was also that the component “Brep Closest Point” doesn’t output the normal, so I wrote the component, quite easy just 20 lines of simple code. 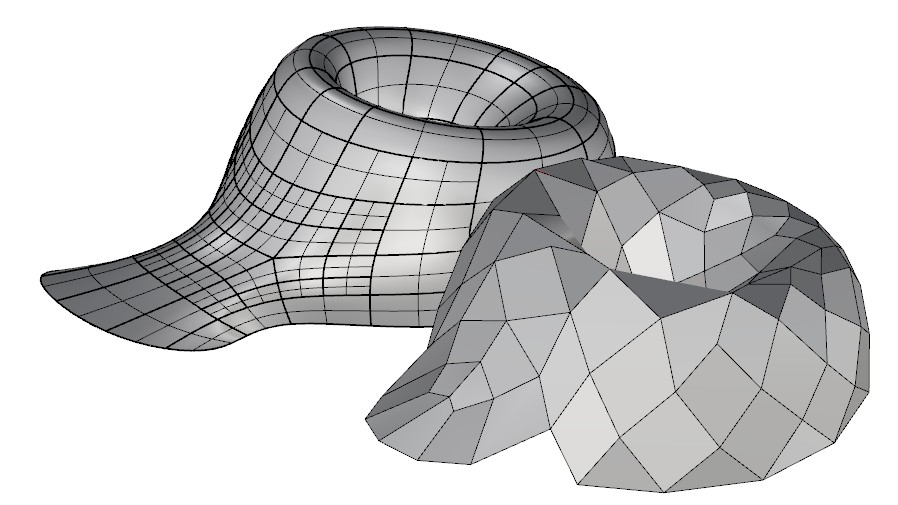 In order to make the Exoskeleton I choose to make only nodes with half members. For the Morpheus project there are nodes and members. My simplier approach could be useful for example for jewels, 3d printing … and surely not useful for buildings. For each node we need the connection with the other node but also the angle between each pair of member. I used some code of one of my tool http://www.grasshopper3d.com/forum/topics/thicken-a-network-of-line.... The angle is used to calculate the radius used to connect members. Rhino angle are on a plane so they are not exactly the same. 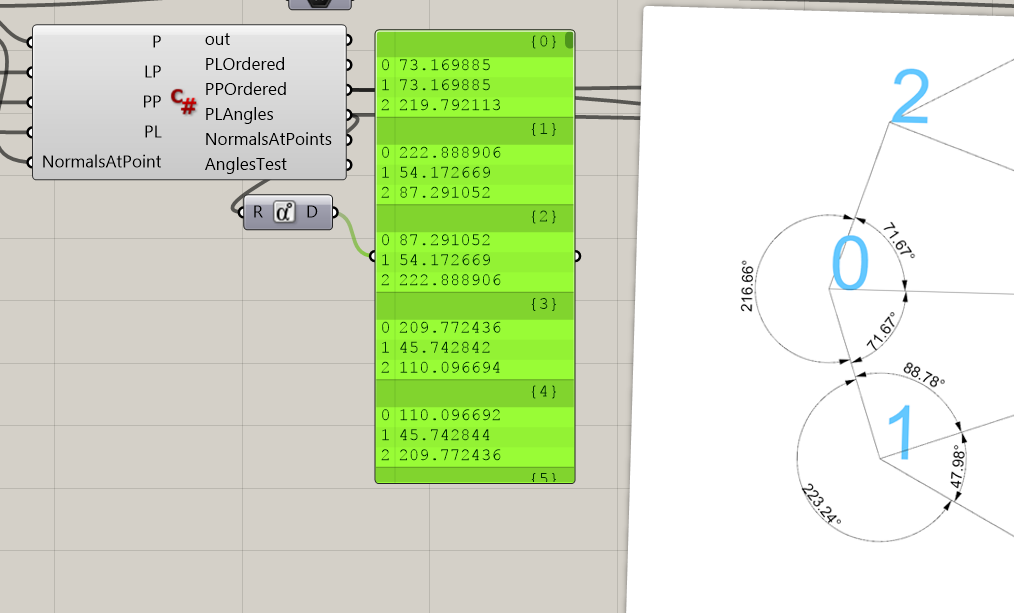 Like in Morpheus Project I used constant radius depending on the domain angle.  Radius must be carefully chosen as this could lead to problem. Script could be used to generate one node, a list of nodes or all nodes. The difficulty was that trim tree doesn’t accept one level tree. So here is the workaround I used.

One other thing to say is that the thickness of the Exoskeleton is driven by offsets and width is controlled more easily.

Here the output of the script, used with curves network (face with 5 and 6 edges). 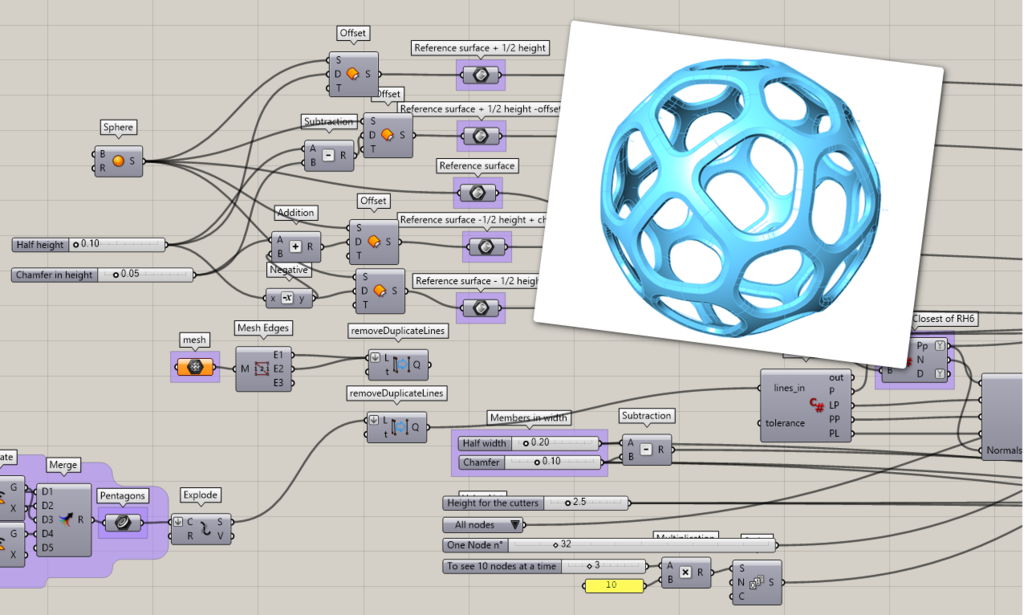 Here the script, Kangaroo is needed for the remove duplicate lines.

Hello Laurent Delrieu, would you be so kind to share the script, please?

Hello Laurent, where is the script？ i can't find it.

Hello, can you please upload script with your mesh as example to analyze?
Because I really cant understand how to apply that script on a custom surface/form

Comment by Laurent DELRIEU on April 3, 2017 at 1:48pm
I am happy if it is useful. It is another way of thickening a network of curves on surface. It's quite simple to have 4 8 ... 2*n faces per member. It is a sort of chamfer.
I hope to make it work for jewels and to treat problems on small holes or big curvatures.

Nice! Wish there was a way to bookmark blog posts.