How large numbers can grasshopper manage? Im having trouble converting a text number to a number. (see all the zeros in the number below)

It seems its not a formatting issue, since when i copy the number to excel it is still wrong. Is there a way to preserve the entire number in the conversion?

I need a numbered identifier string to represent a geometry so i can recreate it later. It needs to be a number for octopus to accept it as input.

Since GH is displaying numbers by default with the .0 at the end, I would say that removes 2 digits giving a maximum of 17 digits. Right now it seems to "break" the conversion after the 16th digit. So, close enough.

This is still partly speculation, but makes sense.

But the real question would be why you need to identify more than 9 quintillion objects!? Are you trying to recreate the universe in GH? ;)

When dealing with integers, Grasshopper uses 32-bit signed integers, that go from roughly -2billion to +2billion. That's clearly much too small to contain your value.

You will either need to stick to strings or switch to arbitrary sized integers. This requires custom coding in Python, or possibly C#.

Thanks to the both of you for fast response. I will need to work around it by splitting it up then.

The reason for such a large number is because it im mapping the UV position of 5 windows on walls. Each window is created from two points in its wall UV space. Each point needs 4 digits. That is eight digits per window. It just adds up... :(

Oh, thanks to the three of you that is. Very thorough response indeed! Hope it serves more ppl as well.

As David mentioned, you can use "BigInteger" data type in C# to work with arbitrarily large signed integer. It's not complicated (at least for simple mathematical processes). here is an screenshot: 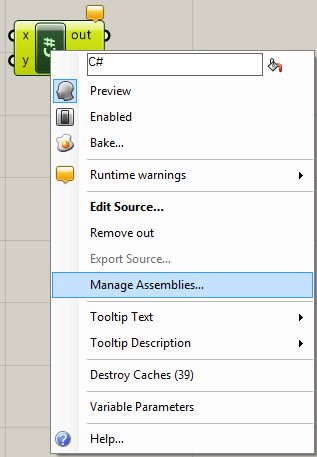 Sorry, I forgot to attach the example file.

Thanks for your sharing, very cool !

However, I need to feed the large number to Octopus, which only listens to the number component. So in my specific case im better off doing a pre split and post merge work around.

I will save this for reference though..