I've been cracking my head for a while trying to figure out a way to draw a grid of voronoi panels over a façade, a bit like Marinus van Hall posted here: Ideally I'd be able to vary the panel size as well as point density. I've tried a few different approaches, including this one, one that feature a world map and also another one that featured a projector (can't find it anymore), but I can't get from there to the panels. Besides, two of them used grasshopper add-ons. Seems like there'd be a simpler way to do this, but I'm having difficulty grasping the whole image to point density to panels workflow.

Any pointers would be greatly appreciated. Thanks.

Wow, that's excellent! Thank you very very much! I was starting to get close to something similar but I was just clueless as to how to play with some of the variables. You've been most helpful. Thanks a lot!

Nice Vicente, but why do your definitions always crash my computer...

Seriously, what's the point of doing this? Why didn't you connect [Merge] directly onto [Voronoi]? 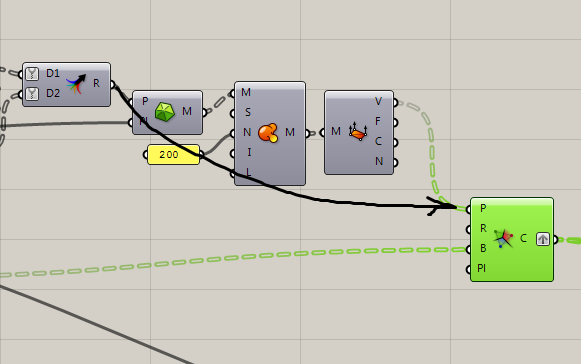 I would have thought its a quick fix solution to stop the voronoi density being disproportionately high along the borders. And it also just makes nicer cell shapes, being more even, there are less edges that are infinitesimally small

It's more about spreading the points more evenly so density is more constant. The small cells on the borders are still going to happen.

It could be less noticeable if it's created first as a single voronoi diagram and then split into the panels (but then it won't look as the reference image). It could also be a good idea to remove the corner points I added before creating the Delaunay mesh.

Whats davids instructions as referenced in the OP?

There's a link to another thread, it's small but its there.

As a slightly different solution you could use meshes to speed up that final step. Might not crash Jesus. I'm guessing you used Weaverbird. I didn't go that way because the OP implicitly said not to use grasshopper add-ons.

A couple weeks I had to do the same thing (smooth a set of points) but used Weaverbird's Laplacian smoothing component. It's much faster than the smooth component that comes with GH, but I used it here because of the add-ons comment.

OOOOO shot down! To be honest, i was just flicking through forum and your post sounded interesting, so i skim-read and posted.

Catmull-Clark subdivision works great and it also gives out a nice smooth result.