it's been a while (over half a year actually), but we've finally arrived at a new Grasshopper release. As you may have guessed, a lot has changed in 6 months and this release represents a significant step towards Grasshopper 1.0

Since there is so much new stuff in 0.9 I feel I ought to caution you to not switch to the new version without carefully considering the pros and cons. There will most likely be serious bugs that our internal round of testing did not find, some of these bugs may prove so crippling to your work that you will not be able to use 0.9 until they are straightened out. You can of course always download the previous version, but you may not be able to open files made with 0.9 on earlier versions. So be careful to not overwrite old files unless you're certain that the new release is something you're happy with.

Grasshopper 0.9.0005 can be downloaded from the usual place. Note that you must have a recent version of the Microsoft C++ runtimes on your machine. See this FAQ post for more details.

Since 0.8 there have been three major changes, hopefully all for the better:

Clusters have been rewritten. They are not done yet but done enough for initial testing. I wrote down some useful details about what's new, you can read them here.

AutoSave has been rewritten and works in a fundamentally different fashion. The goal was both to remove autosave files from visible locations and to provide a more robust recovery system in case things go awry. If you want to know more, some details are available here.

Data Matching has been tuned a bit. Some bugs have been solved and hopefully no new bugs have been introduced. Datatrees should now grow complex less rapidly in certain cases. Again, some nitty-gritty details can be found here. Due to the changes it is quite likely that a lot of old files that rely on a specific data-tree layout will no longer work. This is a necessary evil in my opinion, but be warned that this may cause significant delays while switching over to 0.9

There will probably be a flurry of releases following this one as bug-reports and wishes come in. If you feel skittish about diving into a dangerous beta feel free to wait until 0.9 has settled a bit.

I'd written you a PM this evening with a few more bugs which I guess didn't get to you before going to press.

I got them after I 'pushed the button'. I'll get around to them (and the dozens of others people are typing up as we speak) in the days/weeks* to come.

Cool! would you like me to write/draft up the FAQ on the new data matching components to take the sting out of it?

That would help alot I think.

Sorry, just 'pushed the button' on that one as well. :)

Feel free to post some example files though, I don't have any yet.

Great stuff, although I didn't find any bugs (barely had any real GH time this week) from what I played with it was a nice step forward. Graphics too! 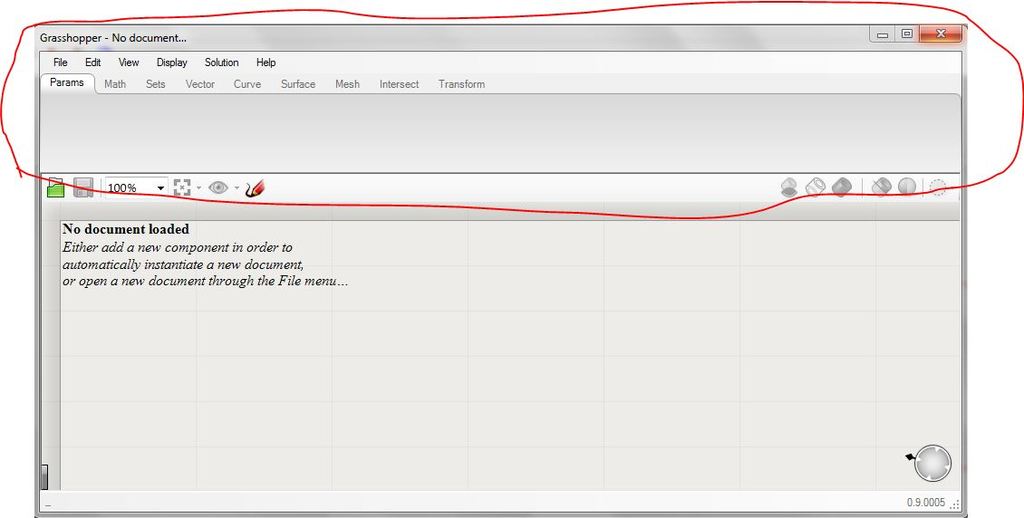 can you show me the banner of Grasshopper with the loaded plugins expanded?

There are several reasons why components might be missing from the toolbars, here are a few:

Basically what I need to know first is whether the components are not loaded at all, or whether they are just not drawn. If you double-click on the canvas and you search for -say- "point", what do you get?

Thanks for this great work :)

I have some error when loading. Please help! Thanks David.