I just came across a strange GH UI issue. Running a script that calls RhinoApp.RunScript and is triggered with a button object seems to freeze the GH UI to a certain extent - it stops responding to double clicks. Pressing the button a second time fixes the issue. This is easily reproducible with a simple setup:

pressing the button once, no response to double clicks (to edit the script, or a panel, etc)... and a second time it recovers.

Seems like the Button is hogging all mouse events. I can't quite repeat it as crisply as mentioned, though after some clicks all mouse events are ignored on the canvas except a further click on the button.

Looks fixable. Probably. It'll have to wait till next year though.

"Button" seems to be freezing the UI even with me. However the Boolean Toggle works very well.

something new with that bug?

If you use a data dam to delay the button slightly it seems to work around this bug.

If somebody is interested in a simple solution to this (without data dam):

Use another boolean variable to store the button value and actually run your code when the button state returns to false again:

This bug occurs everytime your script releaes the focus of the grasshopper window. RunScript is just one of the cases. Attached is the gh file, which shows the problem and the solution. 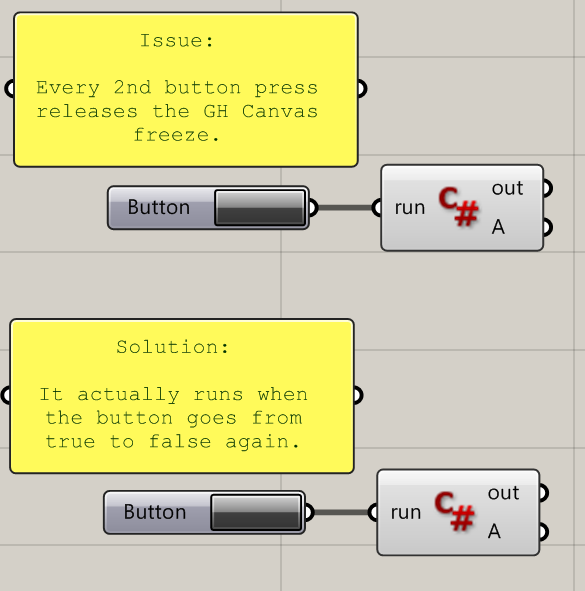 Thanks for sharing! It's actually quite useful to know that, I had to remove many buttons to prevent this UI freeze bug...

Thanks for this Post.  This Bug also appears with the "Quick Baker" in the Heteroptera Plug-in.  I never would have found the issue.