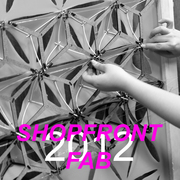 Architects Alan Dempsey, (www.nex-architecture.com) and Robert Stuart Smith (www.kokkugia.com) and interactive artist Ivan Ivanoff (estadolateral.net) will lead students in the creating of 1:1 digitally fabricated interventions and interactive electronic performance art installations in Barra Funda.  Along with other experts, these tutors will teach how to use and apply new design technologies, notably Rhino and Grasshopper (and numerous plug-ins including GECO, Galapagos, Kangaroo and RhinoCam); Arduino and Processing; and the use of laser-cutters, rapid- prototype machines and CNC routers and mills.

Alan Dempsey of NEX, was in 2010, selected by the Centre for European Architecture/Chicago Athenaeum as one of the 40 most significant architects in the EU under 40.  In 2008 he was selected by the British Council as one of the six most significant Design Entrepreneurs.  He previously worked with Future Systems, OCEAN and Homa Farjadi.  Alan was an AA Unit Tutor and is Director of the AA Independent’s Group (www.independentsgroup.net), which facilitates research into the use of computational design and fabrication. Alan has lectured, exhibited and been published worldwide.  His work has received a number of awards, including a LEAF award for Spencer Dock Bridge, and a D&AD pencil for the [C]space DRL 10 Pavilion.

Robert Stuart Smith of Kokkugiais a Studio Course Master at the AA DRL.  Robert previously worked for Lab Architecture Studio and Nicholas Grimshaw & Partners.  He focuses on self-organisational systems and developmental growth, pursuing polyvalent and environmentally responsive affect.  He leads  consultation to Cecil Balmond on non-linear algorithmic design research. Kokkugia has projects in the USA, UK and Mexico, and is exhibited and published internationally.

Iván Ivanoff is an artist, programmer, and researcher. He searches for new forms of communication for the society of the future and is the director of different Media Labs worldwide. He founded the artistic collaborative i2off.org+r3nder.net, which develops multi-media and interactive projects, and Estado Lateral Media Lab to investigate and develop new technologies.

The Barra Funda district of São Paulo was once characterised by a mix of small industrial, commercial and residential programmes, but, as economic policies have favoured larger production industries, numerous companies have abandoned the area. In response, the workshop proposes the creation of new types of smaller industries to produce a mix of both consumption and production, manifested through micro-manufacturing interventions that can co-exist alongside retail and housing.  Computational design and digital fabrication could be used to help create these new micro-industries, which in turn will help empower local craftsman to produce and sell directly to consumers through micro-manufacturing, located in small urban workshops.

The workshop will tap into emergent gallery scene of Barra Funda and local initiatives that use computational technology to introduce a new cultural and economic impetus. The workshop is a part of the International Festival of Electronic Language (FILE), an exhibition of interactive electronic technology, and will import these electronic technologies out of the galler, collaborating with local manufacturers, artists, and activists, with a goal of disseminating a high-tech yet low-cost and small-scale fabrication systems to promote this new micro-industrial movement. The workshop is open to architecture and design students and professionals worldwide.