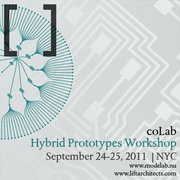 As architects and designers, we make things and build objects that interact with other objects, people, and networks.  We’re constantly seeking faster and more inexpensive methods to build prototypes, yet we are frequently hindered by practical and time consuming factors that arise in the process of bringing our ideas to life. Firefly is the new paradigm for interactive hybrid prototyping; offering a comprehensive set of software tools dedicated to bridging the gap between Grasshopper (a free plug-in for Rhino) and the Arduino micro-controller.  It allows near real-time data flow between the digital and physical worlds – enabling the possibility to explore virtual and physical prototypes with unprecedented fluidity.

This fast-paced workshop will focus on hardware and software prototyping techniques. Using remote sensors, microcontrollers (Arduino), and actuators, we will build virtual and physical prototypes that can communicate with humans and the world around them. Through a series of focused exercises and design tasks, each attendee will make prototypes that are configurable, sensate, and active.  As part of a larger online infrastructure, modeLab, this workshop provides participants with continued support and knowledge to draw upon for future learning.
Attendance will be limited to provide each participant maximum dedicated time with instructors. Participants should be familiar with the basic concepts of parametric design and interface of Grasshopper.

Hybrid Prototypes was conceived through a collaboration between Studio Mode/modeLab and Andrew Payne/LIFT Architects/Grasshopper Primer/ Firefly.