Very basic DLA. It uses Millipede to solve the isosurface and Weaverbird for Laplacian smoothing.

It uses the RTree class in several places, including to speed up the calculation of the field values for the isosurface, which I got the idea from David Stasiuk. It really speeds things up.

The frames are captured directly from the Grasshopper display using the animation feature of the slider. I baked some simple ambient occlusion to the mesh using standard components.

Nick, don't worry. If you search the forum I'm sure you'll find a lot more instances of my name with the extra n than without it.

I don't know about Gaudi either, but the best part of the definition is the ambient occlusion using basic components :P

There's nothing else special except that the isosurface solves really fast (compared to my previous attempts).

There's actually very little code, the bare minimum for it to work.

I should've created the grid of points inside the scripting component but left them outside just to use more standard components. The problem with this is that when inputting or outputting large lists of data to/from a scripting component, Grasshopper takes ages to convert them from/to the GH_ data types. That's why I used the tacky method of inputting them as a mesh (converting them back into a list of points inside the script is also very inefficient but at least it only needs to do it in the first frame), and that's also why I'm outputting GH_Number rather than doubles. If I output them as doubles it adds minutes just to convert them.

i think that without the many x-monkeys Gaudi had a problem.

might be. then they could be seen as early representatives of the species "code monkey" :D

no offence vicente - but i'm sure you take it as a compliment how it was meant.. :)

hmmm, i think that those guys like vicente were responsible for this pattern. ;)
but you are right. i would like to see more recently examples.
maybe from vincente?

(sorry, i deleted this contributory unintentionally: nice work vicente, but i do not know what gaudi could make with this) 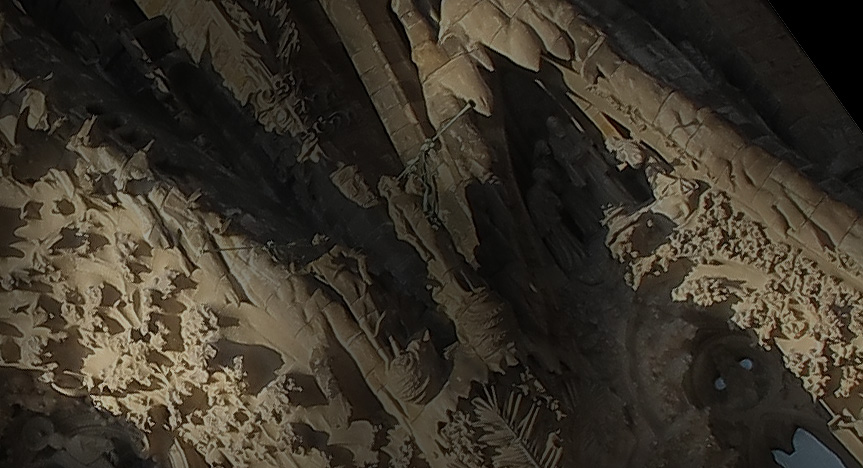 I think he would have known what to do with gh.. Òó

Gaudi would have been envious if he knew that we will have such tools today. Great work! Looking forward to to look into how you solved it!

I have also just realised i always thought your name was Vincente. Apologies Vicente

Really cool Vincente! Nearly everytime i see one of your scripts i learn alternative approaches to work out stuff. The generation of the points and isosurface resolution is great, so simple. I have just substituted it into one of my definitions and it shaved a solid few seconds off the calculation. Thanks