The GHelix Bangle: 'sketching' in Grasshopper and 3D prints The GHelix Bangle is a reinvention of one of my earlier Rhino/3D print designs, based on the curious topology of the Moebius strip.  Although it already exists as a Rhino file, and has been printed out on a number of occasions, it's a tedious and time-consuming process trying to make changes to it.

I spent a day, recently, embedding the original, Rhino-based, Helix Bangle's design language into a Grasshopper Definition. Radical changes to its shape are now just a matter of pushing a few sliders around, with instant feedback of their effect: all my energy can now go into judging the quality of the evolving design, rather than wrestling with the details of NURBS surfacing. 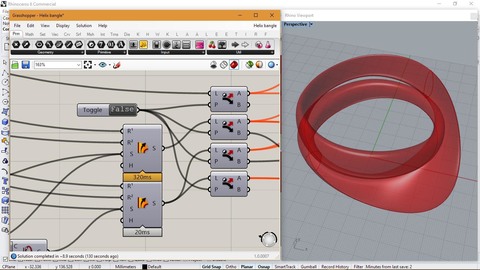 While editing curves and manually recreating surfaces in Rhino was already a major pain, an even greater disincentive to exploring the design 'space' of the Helix Bangle was having to rebuild the minimal support structure (required to print it on a 3D printer) each time the design changed. On a good day this might require 20 minutes. On a bad day it might stubbornly refuse to co-operate even after two, or more, hours of tweaking and fiddling. Working out how to automate my way around this potential bottleneck, in Grasshopper, took a further day. Most of that time was taken up by running test prints on the 3D printer, to check that the resulting support structure actually worked in practice, rather than working in Grasshopper, however.

The support structure itself is generated from three Lofts, two Pipes, and a handful of Surfaces From Edge Curves, which, in the final step, are combined with the design proper in a Boolean Union component. As this takes about 7 seconds, on my rather modest laptop, I incorporated a toggle switch to allow the bangle surfaces to be previewed on their own (in a Geometry component) before creating the supporting surfaces. 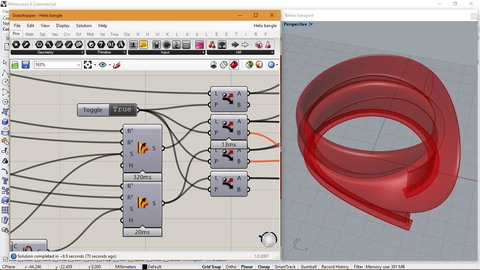 Once the Boolean Union of all these surfaces, the bangle design and its required support, has been Baked into Rhino it follows the same route as it would have done in the original: first being exported from Rhino as an STL mesh file, then subsequently loaded into Slic3r and converted into the flavour of Gcode required by my Fisher Delta 3D printer. The Gcode file created by Slic3r is then sent to the Fisher's internal memory over a LAN cable. Printing it out takes about 2 hours.

A useful feature of the Fisher, compared to the Huxley I built a few years back, is its removable bed. This makes flexing the resulting print off the bed, without damaging either it or the bangle, a straightforward process - no more messing around with palette knives! 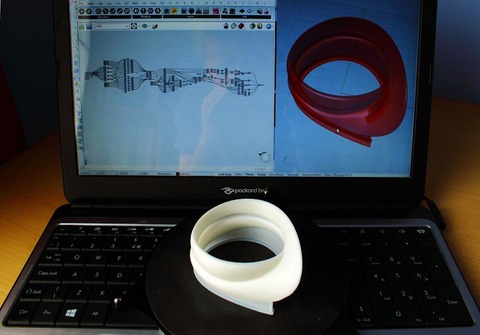 Finally, most of the support material (which is 0.4mm thick) is simply peeled away by hand. As there is so little of it in contact with the print, and the surface finish with a 0.2mm layer height is already quite smooth, it takes very little work with files and glass-paper to remove any rough edges, leaving it ready to be worn within 10-15 minutes of leaving the printer. 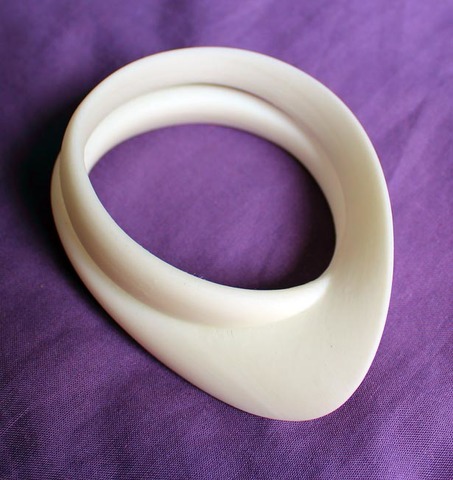 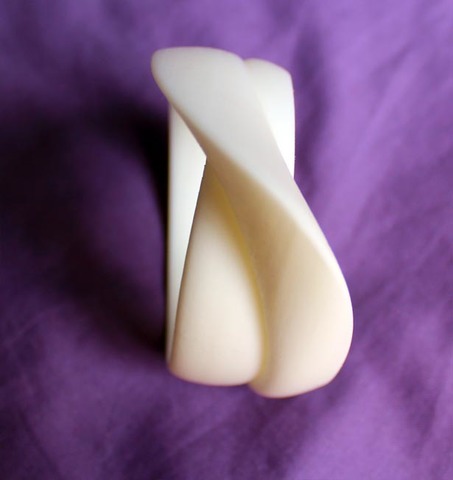 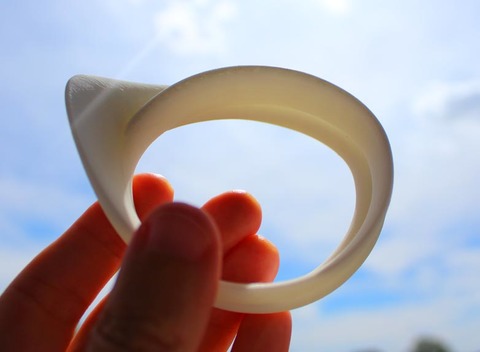 So, the total time between firing up Rhino and finishing off a new, ready-to-wear, bangle is around three hours. If a purely visual model is required this time could be cut down even further by using the 'Spiral Vase' option in Slic3r and printing out the design as a hollow shell. Such a short cycle time, from idea to physical output, encourages one to experiment with options: 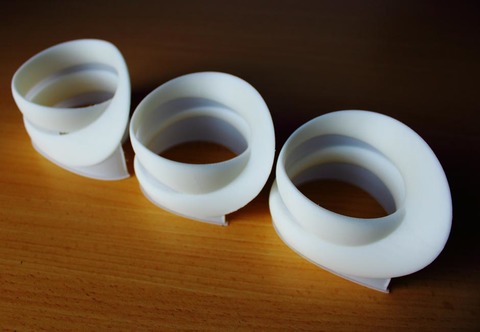 The most interesting thing about all of this is that the GHelix Bangle has never existed as a drawing: it came out of playing around with the surface creation tools in Rhino, and seeing something interesting emerge, instead. It is difficult to see how else it might have appeared, given its subtly 3-dimensional form and smoothly blended organic shapes. Even the most talented and experienced paper-based sketcher would be unlikely to come up with anything like it. Or, in the unlikely event that they did, to then develop it into something as truly 3-dimensional and aesthetically pleasing in a reasonable amount of time.

While Rhino itself wasn't quite up to the task of developing it either, the ease of exploring variations of this design in Grasshopper, and the ease and speed with which it can be printed out on my desktop, suggests a kind of sketching process. It may not seem so to those who are wedded to 2D sketching as an essential part of design, but this combination of Grasshopper and desktop 3D printing certainly feels like an effective way of creating and exploring designs that are unlikely ever to emerge from the end of a pencil. It's definitely a different and refreshing way to work...

The GHelix Bangle is perfect accessory for sketching and your project is a perfect guide for me to use it professionally. I tried to draw bangle sketch using grasshopper but couldn't done it with clarity. I read what he said about dissertation writing services for my projects. I am thinking to note down this project word by word so that I can have a guidelines while doing my sketching project.

Hi there, Love the design and was wondering if you would share the definition? Thank you, Oliver