Inspired by the work of Rinus Roelofs I did a GH definition to weave surfaces. At first it used the Rhino command "Patch" to create the surface from boundary curves. Unfortunately "Patch" is not accessible in GH, so in this version another Rhino command - "NetworkSrf" - is used instead. 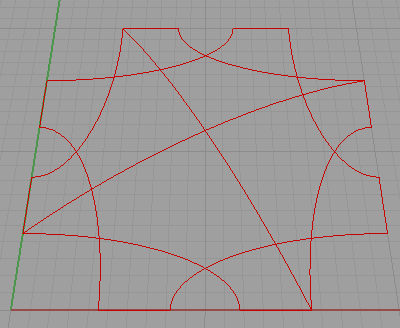 To use the definition you'd have to bake some curves in GH and then select the baked geometry in Rhino and run the "Networksrf" command.

The network-surface is then referenced back to Grasshopper.

Before baking there's two things that has to be set, Height and Size.

The images are not real renders, just screenshots from the Rhino viewport using Auxpecker. It would be cool to make a nice architectural screen and render it with sun shining through it. Connect the online here great enjoyments to Play free mahjongg connect game it was the full enjoyments for all players.

Thanks Matthew, you'll find a tutorial in the grasshopper primer. From page 79 Andy shows how to fill an entire surface with your geometry.

This is fantastic! How did you duplicate this to make that render? I can only make 1?

Comment by Lars Renklint on July 28, 2009 at 6:39am
Thank you both!
Yes, Erwin Hauer's name has came up every now and then.
I talk about him in the next blog post on connected holes.