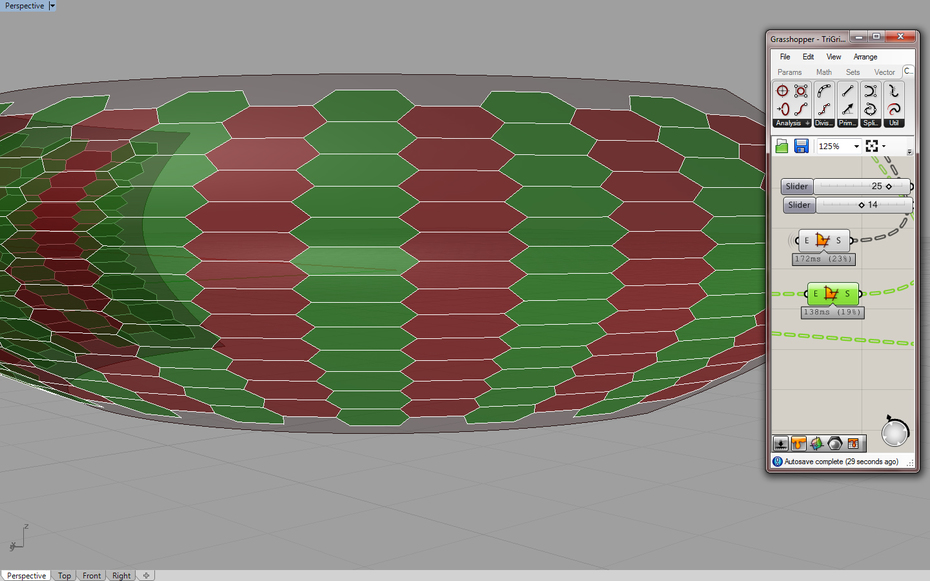 Wohooo did it! Planar hexagons on a double curved surface!!
- no additional scripts/plugins
- hexagons planar and centroid tangent to surface
- hexagons fit watertight.
If there is intetest ill make this public, after some tweaks

It's on my blog here: http://www.grasshopper3d.com/profiles/blogs/planar-hexagons-on-doub...

It needs some polishing, it doen't work with any double curved surface as in, when you're surface goes from being convex to concave or vice versa (curvate gets close to 0) it gives unwanted results.

I was wondering if anyone could share this def with me I have been trying to do it for 2 days with no luck! Please give a little hand here

Your research is quite interesting, its a different approach and cool to see different results! The thing is that I also use tangent duality (instead of dupin duality) to achieve the planar hexagons. The restriction im facing now is when a surface is almost hitting curvature=0 (like 10e-8 or smaller)  i hit my dupin indicator (see paper) hits infinity and i cant compute a valid phex. They describe in the paper that there solution is to 'skip' that part of the surface were it is almost k = 0. So the underlying triangles are al al on points of the surface were k>10e8. But i havent figured out yet how to adjust this. And also if a surface goes from being double curved to single or planar, that transition part and the continuation is quite difficult. Unfortunately i dont have that much time to investigate more, ill keep you posted though and thanks for your message!

Nice work! I've been generating planar polgons on concave surfaces for a while now, by means of what is called 'Tangent duality' in the hku-paper you attached.

At Karch.dk the Danish engineer Ture Wester used the metaphore of slicing small peices of the surface of an apple untill all planes are planar. I am working on GH defenitions to automate the design and production off shells structures.

The generation method for the planar facets is based on point patterns so it is not resticted to triangles only. The disadvantage is that I use planes and boolians to come to the final faces, and this is quit slow!

If I was to convert my method to the 'Dupain duality' from the hku-paper, how do I get from the Tangent to Dupain?

Yes i saw those, if the curvature is > 0 you can solve it by using concave hexagons (aesthetically preferably), which is the case in the hexigloo project, the other one bends the hexagon.

In these examples, a hexagonal grid with no gaps between the panels.

http://www.contemporist.com/2011/06/25/hexigloo/
There seems to be non-planar hexagons, but each cut from a single flat sheet. I do not know how they did so, it could be used for a bendable material.

Yes Antonio thats right, where it almost hits k=0 it gets tricky. Thats the issue im trying to solve. I used a regular triangular grid as a base like described in the paper to generate the hexagons. To do this I used 'tangent duality' of the triangles (also in the paper). Yes that's the Soumaya Museum in mexico DF. I believe GT did the facade. If you look closely, the hexagons are not connecting watertight, there is a small gap between them so they can all be congruent, the small gap makes that possible. They're evenly distributed among the surface which is nothing new, it has been done before only with discs by future systems,http://www.gadailynews.com/thumbnail.php?file=assets-2012/Selfridge...

For me the challenge was to create a water tight planar hexagon grid mainly for efficiency reasons. If you look at the joints, which are more simple and easy to construct (only 3 edges come together, were a quadricular grid has 4 and triangular grid 6). And of course the panels are all planar :). Aesthetics came second.

With negative curvature it is not possible to aggregate your surface properly with convex planar hexagons (that fit watertight that is). That's why in the negative regions the switch from being convex to concave. See the pdf for more info, I also didnt knew this when i started messing around :)

Thanks and I`ll keep you guys posted!

As far as I can see you've got a zone with almost K=0 were the hex's are quasi-rectangular.

Did you folow the triangle generation process described in that paper and continued it to get the hexs?

There's something I don't understand, I've seen a building in mexico were the hexs were regular even with K<0 (I mean with the shape of a regular hex, not the diavolos ones) I wonder how could they get it¡¡ 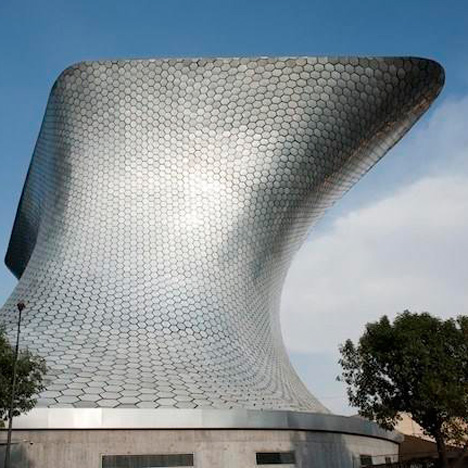 I made it work with double curved surfaces with gaussian curvature either < 0 or > 0 now. The only problem Im trying to solve is single curved surfaces or surfaces which are planar (the latter is already suitable for planar hexagons of course). 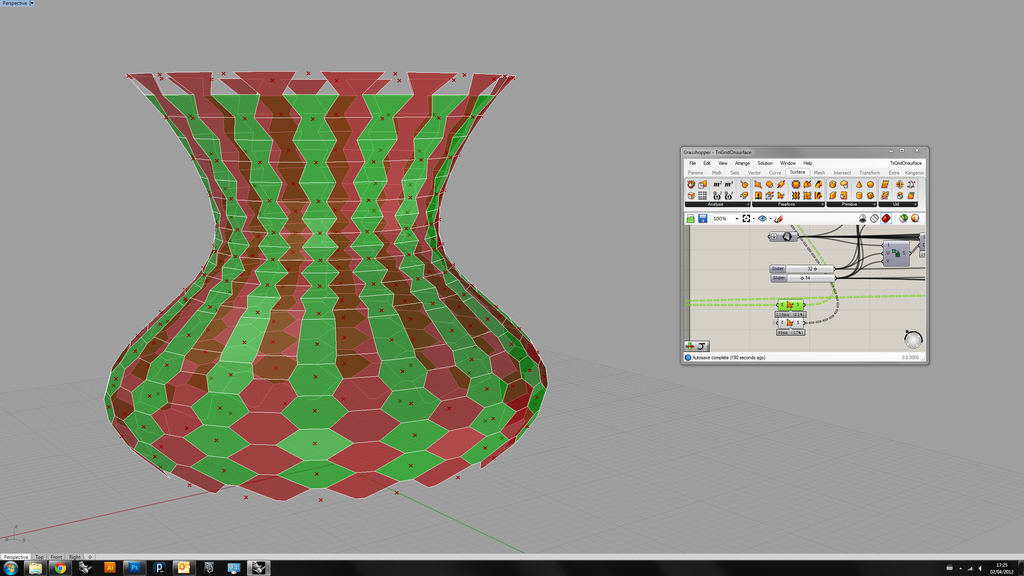 I've tried to do it but i gave up on it¡¡ did you really work it out from that paper' amazing¡¡ Would be nice to have a look at it, and maybe we could help you with negative curvature issues.