Are there any example files, or a doc which shows how to use Shortest Walk Component in GH?

Reparameterize fixed it, at least on my def.

Also, I noticed some roads look like they are intersecting, but only come close, you should check that.

(Playing with the model units and absolute tolerance could be enough to fix that, dont forget to recompute the solution)

etc and the curve parameters are going to be

hello! I want to ask a question,Do you know the Battery's name? 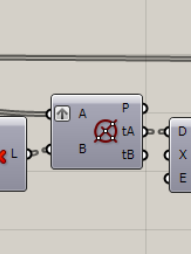 if you can answer it，i will appreciate you !thank you!!

Hi, Your solution works great. However i can't seem to get it to work if I have multiple sets of lines as an input. I'm sure it's only a matter of some data structuring. but I can't seem to get my head around it!

so basically the same operation on multiple sets of lines in one partitioned list.

Can you please check the following discussion as well?

i would explain what i want to do here so that one could understand my query's relevance to this post.

for my case, i have a bus route map to work on. here i have posted only a small portion of the route in rhino file and a jpeg for the whole route to give an idea.

There is one bus stop in very zone-zones are defined by pink lines on the primary route. By zones, I mean the catchment area of the bus stop.

Then there are different programs along this route.

What I want for my script is to consider these zones (in this case, there are four zones defined by extended pink lines) as separate zones and then find the bus stops (I know I can input the bus stops manually). Now from those bus stops, each one for its certain zone, I want to find the minimum distance from the main street towards every urban program that is present in that zone. That way, I would get a list of programs that are nearest and farthest from the main bus route in every specific zone.

Want to do this process on my whole route which is about 27 kms long.

Furthermore, I also want to set a point somewhere in middle of the route and then assign values to all the program lists extracted from individual zones on basis of distance from that specific point. That way, I would get a hierarchy within these lists and would be able to sort them in a way I want to use them.