Select items by rows and column 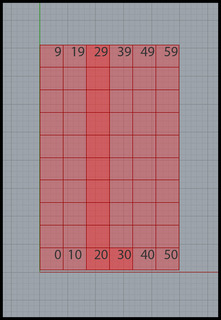 In this project, I've created panels using the LunchBox Plugin. After it, I try to generate list of ranges and selecting certain range using List. As you can see list of the range that created are 11 number instead of 10 (0-10, 10-20, etc). Also grasshopper numbered (i've numbered it for easier view) the panels vertically starts from bottom left.

2. How to change the numbering horizontally so i could select items by row?

3. I also found out that some surface have correct U and V direction and some of the have it inverted (U in V position, vice versa). This has cause some problems in my design. is there a way grasshopper or rhino to change its U &V ?

Welcome to the forum.

If you attach your definition it will be easier to help you.... (with also .3dm file or referenced geometries internalized)

Edit: maybe you can partition the "Panels" element with the correct row/column amount, and then do like in my attached solution.

You'll want to use the series command in tandem with either the sublist or list item along with some proper grafting and flattening (order of operations will be crucial here).

So if you have a 5 by 10 grid you have fifty squares, if you want to group things by row you'll need to take the sublist of the entire grid consisting of each row (Dom: 0-4, 5-9, 10-14, etc) so use two series commands, (these will be parametrically linked to the initial sliders which determine the grid size so that you don't have to keep changing every parameter as the grid changes (kind of the point of all this right?))  The First series will start at 0 (S) step up by 5 (N) and have 10 values (C) the second series will be the same except that it will begin at  N-1 (where N = the slider dictating number of columns in this case, 5), these two series create the Domain for your sublist.

To get the columns you can use the List Item, and again using two series this time in tandem (series rather than parallel, think batteries...) The first series will start at 0 (S) step up by 1 (N) and have an input from the slider dictating the number of columns, use this series as the input (grafted) for your next series start value, N = number of rows slider and C=Number of columns slider, everything nice and tidy and all linked through the initial sliders.

Now go get into GH and make some magic happen, no script gifts here, tee hee.

Check this as well. Best.

Hi Riccardo Majewski, thank for the input. I'll try to remember to upload the corresponding files next time. Also thanks for the example. I didnt know that GH's grid could do the row and column selection easier than lunchbox. It also took less space. Lunchbox's selection tends to select each panel which makes thing a little bit complicated.

Hi moonbeast, thank for the explanation. I think i kinda get what you meant. If I understand correctly, the 2 series commands mentioned are in Hyungsoo Kim's pic, right?. Also thanks to Hyungsoo. If you didnt use the Tree command, i'll never understand it. :)

I actually wanted to select each column to move downwards periodically. The center column will be the highest point. the further the column, the lower the column. Each surface of panels will have different dimensions since the surface itself are vary (40ish surface), which i think i can figure it out myself.

Currently it looks like spaghetti monster since i have to repeat each codes every surface (every surface have multiple data stream and need to be flatten). Also every surface have certain variable that are different each surface which makes things couldnt combined as a single codes. But i'll try to make it shorter using the GH's grid. 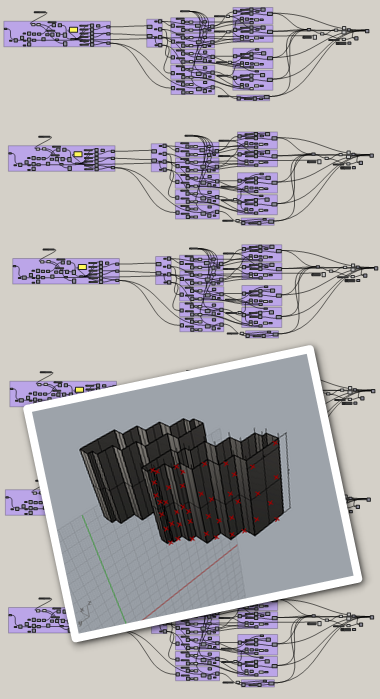 Anyway thanks for the input , cheers!