I would just like a small buying advice because I am preparing to set up a PC. In your opinion, is it better to have an i7 7700k or a Ryzen 1800x or 1700 to run grasshopper and rhino?

What would be the best config from you? Ram> 3000ghz? Gtx or quadro graphics card?

In terms of graphics cards, NVidia always seems to be a better choice than AMD. AMD is trying hard but 90% of the problems we run into with graphics and performance is related to AMD. Never get Intel graphics.

In terms of memory, the more the better. Nothing under 8GB, I'd say these days 16GB is the minimum you should aim for.

In terms of hard-drive, you can certainly go for an SSD, they are much faster than spinning discs, but they are also less reliable. They seem to break down earlier. So even if you do get an SSD, make sure you have lots and lots of backups on a reliable medium.

Processors are problematic. At the moment it's better to have a faster processor with fewer cores. In the future (especially the far future) it will be better to have more cores, even if each one is slower in and of itself.

But yeah, like Peter said, if you're actually designing a custom set up, just make sure that you can upgrade individual bits of it later without issues.

BTW: If there's 4K on hand this is what I would recommend (Puget Genesis1 ... or a home made "Genesis 1"). But ... on second thought I would swap the blitz SSD for an another WD RE (better safe than sorry).

BTW: Avoid an Asus X99 mobo (works when it works). Maybe a Corsair Obsidian 450D is on par with the Fractal R5. 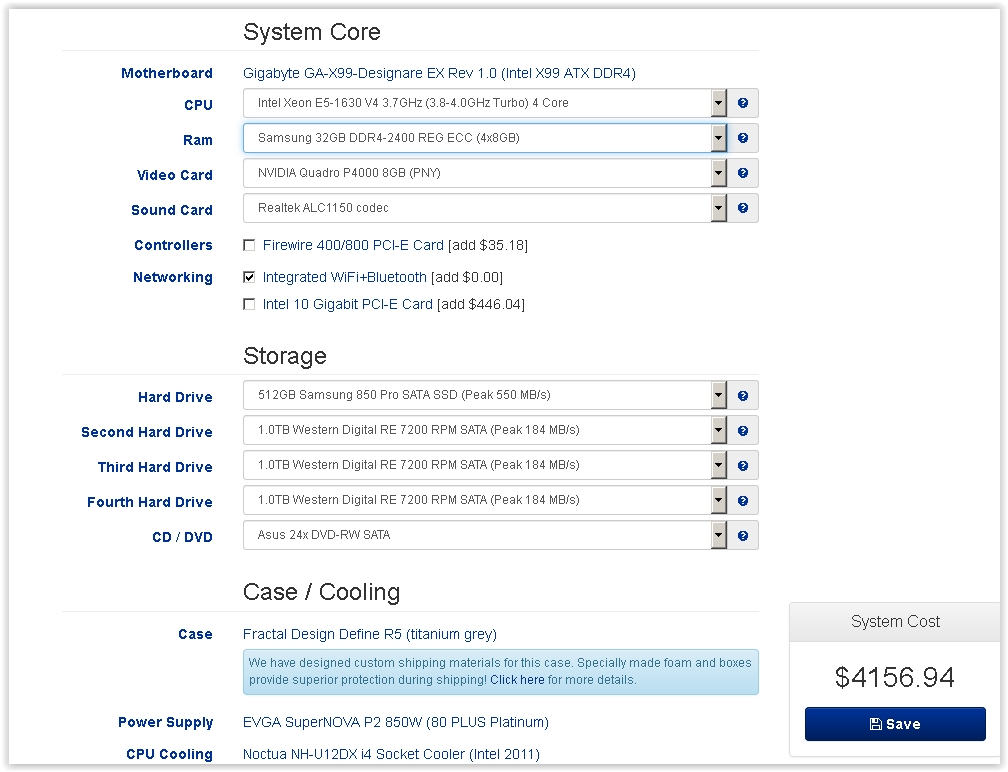 I for one would like to see AMD succeed with their new Ryzen design. The reason why Intel is so damned arrogant and expensive is because they have no rivals. I know it, and they know it. I wish it wasn't like this. But for now that's the way it is. I would wait a while to see how AMD makes out, before my next CPU/Computer purchase.

I think that the best for the moment is the 7700k i7 (as long as grasshopper is monothread) I did not know that the SSD was more fragile, it's good to know.

I have intel graphics on my macbook pro and it's really very bad ...

Except for one thing I totally agree with David's comments. What end users want most is a system that is both reliable and fast, and as long as GH is single threaded it makes no difference how many CPUs your system has - the clock speed is what governs processing time.

Where I disagree with David is on the reliability of SSDs VS hard drives. I think it should be clear that in general any mechanical device will be less reliable than a solid state one. From my own experience over many years with all types of computer systems I can honestly say that the only drive failures I've had are with hard drives. For my own desktop systems I've been using SSD boot drives for a long time and never had a single problem.

I will admit that SSDs have an additional layer of firmware that controls how they read, write, and store data, and obviously if this firmware is buggy the data on the drive is at risk. But I have never experienced such a problem, nor have I heard or read about any.

Of course, as David said, backups are always good to have. Anyone who is doing real work with they system should make regular offline (and perhaps even off-site) backups. But the bottom line for me at least is that SSDs provide a much better place for your OS and applications, and by better I mean both better performance and reliability.