next to the custom name field in the component and parameter menus, you'll find an icon. The default for every component is to obey application settings when it comes to icon vs. name display, but by clicking on this icon you can override the default.

Would that be sufficient to satisfy your labelling craves?

That is definitely worth knowing. I guess I'm using what I'm assuming is a name and using it as a description. So sometimes I'm putting descriptive sentences rather than labels. It was for a workshop, and I wanted the most level of detail. I like these labels better than scribbles since they're attached to the components. But the way I'm doing it is fine. Control-G takes all of half a second, so it is working for me now. Just a thought that happened during work... 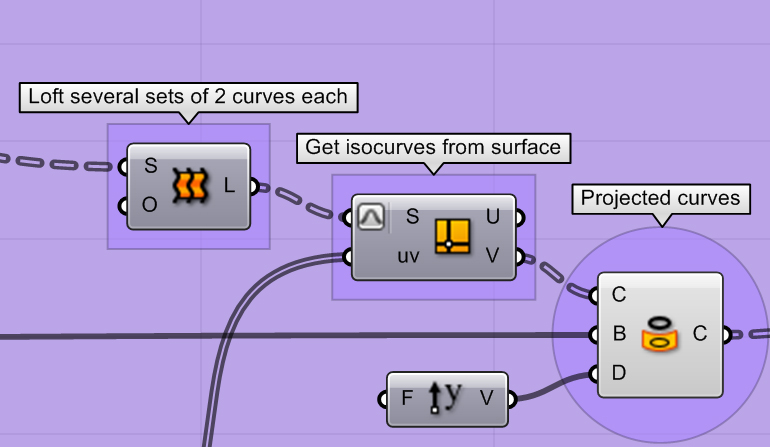 What if I gave you the option to attach scribbles to objects? Just thinking out loud here, it might not be a good idea.

Permalink Reply by Danny Boyes on April 4, 2011 at 10:25am
I think it's a great idea, to have the option. How would you tether and untether it?

Not sure yet, probably just by dragging. Have a little anchor point on every object that's only visible during a single scribble drag, if the scribble anchor and the object anchor are close enough when the drag ends, it get's attached. To detach, simply drag the scribble away from the anchor.

Or would you rather have an unbreakable diamond tether?

ps. "Well, it's a spaceship, so I'd say anywhere between zero and one!"   one of the best lines from Futurama.

I tend towards readability and fewest keystrokes, whatever option that leads to. Scribbles seem to have many keystrokes compared to using the groups.

Do components have a description property? Maybe there could be a view mode that makes descriptions show or not (like the Profiler does).

Component do have a Description field, but it's not editable at present and it's used to populate the verbose portion of tooltips. I /could/ make it editable, but I'd also need a way to turn on the tag display for it. Alternative is I could make a separate text field tat always display as a tag when set. Or the third option is I allow you to attach another object (Scribble, Text Panel, some custom object) to a component.

Permalink Reply by Andrew Kudless on April 5, 2011 at 1:00am
I do the exact thing as Chris (grouping just to get a text description) as I teach a lot of workshops or am creating definitions for others to run. I like the idea of creating editable component descriptions that would stick with a component as well as the idea of being able to attached text fields to groups or components.  Since groups are not editable (you must destroy them to add new members to the group) I have found myself deleting a group (and it's lengthy description) only to have to retype it after I have added a new component to the group.

Does anyone has any suggestions about a good UI to add components to an existing group?

Here are some ideas, but I'm not too fond of any of them:

1) When an object is dragged into the contents of a group while holding ALT or CONTROL or something, it automatically get added. Unfortunately this won't work for removing objects from groups, and it would be nice to have similar UI for both operations.

2) Groups can have special icons on them somewhere and when an object is dragged across one of these icons, it is either added or removed from the group. This involves drawing extra gunk on the screen the whole time.

3) Gestures, when you shake an object, it is either removed or added to whichever group it's currently coincident with. There is a problem here with discoverability and nested groups, I have also never before tried to interpret gestures, so I cannot guarantee I can actually pull this off.

What about something similar to the Mr.Sparkle icons (arrange/distribute)?  For the group they only become active when a group is selected plus at least one component.  If the component is outside the group a plus appears to add it.  If inside the group a minus appears.  This avoids having to drag things around.

Permalink Reply by Chris Wilkins on April 4, 2011 at 11:00am
The excessive labeling resulted from the audience. Don't ever get suckered into doing a Grasshopper workshop when it is mandatory attendance for a basic visualization class, and most of the students had never heard of GH two days previous... just a rant...

Yeah I get people every now and again on workshops who have never used Rhino before either. It's always quite a struggle.