Grasshopper 0.9.0051 is now available for download. This new release represents nearly 8 months of development so there's a lot of new stuff and also potentially a lot of new bugs. There are some major changes so please read the following carefully before upgrading:

That being said, you can download the new release from the usual location. Be sure to uninstall any old Grasshoppers first!

It is always possible to revert to the previous version if you find that this release does not work for you. Details on how to roll back to 0.9.0014 are posted here.

Ok enough hedging, on to the good stuff.

New features in this release:

New components in this release:

Bug fixes in this release:

Not all reported bugs have been fixed incidentally, hopefully we'll get around to them in due time.

In order to revert back to the previous version of Grasshopper, follow these steps.

Is there a specific reason why uninstalling of the 0.9.0051 version should be the way you described it, without the use of windows uninstaller, or any other uninstalling application?

RHI doesn't come with an uninstaller yet. I do not know when (or even if) we're planning to support this.

Hi David, the weavebird plugin do not work in the new version.

I thought it did! Can you message me the error you get? 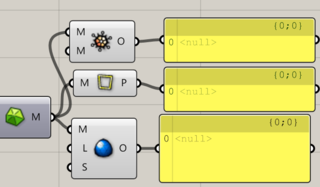 I'm going to ask David for explanation or if he can fix this.

It did not happend in version 0.9.50. Thanks for sending this in!

We found the problem and I'll release an update later today.

Though even then WB won't work, but at least it will tell you why.

As soon as the new version is out, I'll try to release a new compatible version. Thanks David for going through this bughunt with me.

I just realize you are the developer of weaverbied.

Thank you so much for the quick respond.