i  mean if we have one to maximize , another to minimize and third to have absolute value

i  read your blog which explain the idea in details but still cant perform it as there are no rules to do it ?

There are no rules. You just need to come up with a function that combines your three values. It might look something like this:

The weighting factors you spoke about are the tricky part to me. Is there any resource (book, PDF, etc.) that could help you to find the better values?

I've maked using intuition, but I guees that must be somewhere some rules to make this process more..."scientist", "accurate".

No books or resources I'm aware of. But the theory is very simple. What you should aim to do is 'normalise' all your fitness components. I.e. make sure that the worst possible fitness and the best possible fitness for each component have the same value.

Let's say you have your three components as mentioned before, A, B and C. A is to be minimized, B is to be maximized and C is to be optimised at 15. Furthermore, the possible values of A can vary somewhere between 10 and 500, B can vary between 0.1 and 0.8 and C can be anywhere roughly in between 5 and 60.

The range value is the important here because it tells you the 'strength' of the variable in the total fitness. Typically you aim to make all variables roughly equally strong. Which means our fitness function needs to have weighting factors, so that the components of the fitness function are all {0.0, 1.0}. The old function (without weighting) looked like this:

The 'rules' could be summarised roughly as follows I suppose:

Assuming the fitness progression is linear (which is not a given at all), the fitness ranges before normalisation looked like this: 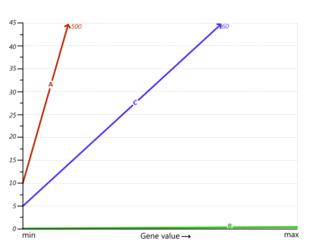 and the normalisation weighting factors pull them towards each other. 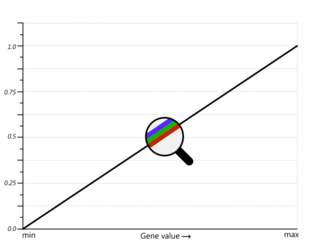 Btw. the minimum and maximum values a fitness component can have cannot be inferred from the problem. One way to figure them out, is simply try a boat-load of different combinations (and I mean a boat-load, way more than you'd need for your typical solver run) and record the ranges.

But hopefully you have a reasonably advanced understanding of the problem you're solving so you can probably guesstimate reasonable min/max values.

Really nice post. All concepts clear. More complicated patterns could be achieved mixing that concepts you explain really well here; the problem could be that you said: don't know the correct range...and like anyone could see initial values are really important using galapagos.

Thanks for this really nice and detailed explanation :)

I have seen your comment and followed you in my simulation.

However, the expression seems not working in my case. Could you please let me know what I can do in this case?

One of your values is not a number, it is Null. I don't know where it comes from, but it may either be a bug somewhere upstream or -if nulls are expected- you have to deal with them.

Hi, David, Thanks for your replying.

Yes, you were right! I found out the reason. It is because of the Null.

BTW, is there any rule that I should follow to deal with the weight of each fitness? As the whole restriction function set now, I cannot get any process displayed on the window for 5 hours.

Do you have any suggestions? How long does it take to perform one iteration? If it's a long time then Galapagos is probably not a good solution since it will require several hundred iterations before it will generate anything close to a good answer.

Is there any way can find an optimal solution with a plugin, such as Galapagos?

by the way, where i have to paste these Functions

is it within Fitness Target or Fitness

if the variables are the sliders, is that mean i have to rename sliders as A, B, C .. etc

i will really hope if you can show us a simple sample, David