A solid waffle for laser cutting.

This script is aim to take in a BRep polysurface solid for generating a laser cutting file.
It can handle hollow forms, cantilevering masses and can generally take more complex geometry then the usual section plane-section curve algorithm. This is because of an operation which determines the middle point for notch/slot to happen, instead of the usual fixed height notching. This is not a simple script, not intend for general purpose.
The script still relies on solid Boolean operations, thus limited to what Rhino 'can Boolean'.

I'll add more description about the script later when I have more time.
I attached a form testing file, which you can play with some forms that I've sketched.

This is my first post, suggestions and comments appreciated.
Inspired by David Fano's Parametric Truss script.

I'll give some basic instruction as (with all my apology) I'm pretty busy these weeks.

The first step is to locate your geometry near the zero-zero. Do it in the top view, and keep everything on the upper right corner or zero-zero.

Adjust the X and Y spacing and number of sections. So that the cutting planes intersect the whole geometry. (like below) (ssav: for your Geometry I set the spacing (both) here to 200, #X=18, #Y=14) 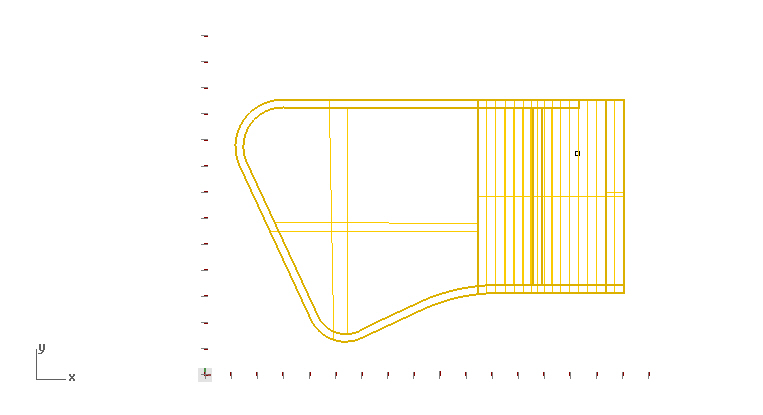 Reference the Brep (ssav: your geometry is not well joined, I just selected all of them and join). The script should calculate.

You can adjust the material thickness (ssav: depends on your unit scale again, I set here to 50)

i've tried to apply it on my computer but i got this , i'm using the latest grasshopper & my units are set to meters

also i don't get what are the unit used in material thickness slider ??  also the sections generated , they look weird , don't they ? what can i do

Sorry for the incomplete tutorial,

The unit used is the rhino unit, so what ever unit your model is in, the GH takes that unit. The sections are weird because you have set the spacing too wide, and the material thickness may be too thick, try to have around 15 to 20 slices, and have a reasonable thickness (1/3 to 1/10 slice spacing)

Thank you Victor. It has been working nicely. Question, what would cause the section to fail in one plane only? Certain x and y spacing yields areas where the section does not calculate.

I wrote this script long time ago, I forgot why :P

I recalled some fact is that, when the planes are cut exactly at some parallel surface. Or simply if Rhino Boolean calculation give up, it will fail.

that is why sometimes changing the location of the geometry, or plane spacing or something else slightly (very slightly: say less than 0.001 unit) might get rid of the problem.

Another thing is that your geometry is better neatly build, water tight is a must. No overlapping or self intersecting surface, etc.

Thank you Victor for your definition. Working nicely.

You have this grasshooper and the rhino to send me?

I want to understand better.

This thread is super old now. Please follow the past messages and the script is somewhere. This is no longer maintained and GH version might have breaking changes to this script.

Permalink Reply by Victor Leung on February 7, 2011 at 5:46am
I have recently organized my previous works on my own website, and have this thread reposted there, feel free to have a look or subscribe to my RSS if interested.

Permalink Reply by carlos mauricio rodriguez on February 8, 2011 at 12:35pm

Thanks for sharing this.

It's going to open up many opportunities for 3d studies.

Relativley new to Grasshopper but can understand alot of your fabulous script.

I've having trouble using it.

When I set my Brep the section turns red and then the list of points that determind the X and Y spacings disappear???

Any tips would be much appreciated.