To complement the recent Exoskeleton wireframe thickening tool by David Stasiuk and myself,

I am also sharing this component for cleaning up messy wireframes or line networks.

You provide it with any list of lines and it turns them into a clean directed graph or network.

-Snaps together nearby points

It also outputs the topology information of the network, saying what connects to what:

-The index of its start point

-The index of its end point

and also, the simplified graph - with all nodes of valence 2 collapsed.

appears under the Mesh>Triangulation tab 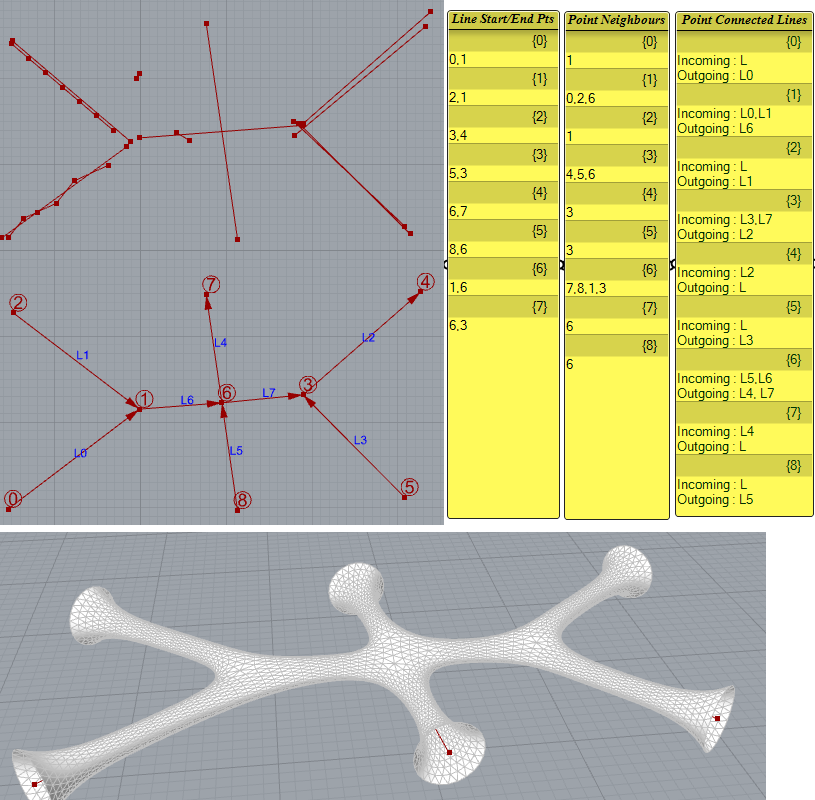 If you have a new house, the best method to prepare it for a cleaning is to clean it by hand with a stain-removal product. Riverside House Cleaning Agents, for example, can be located on our home page and are effective in your home. If you have an older rug, vacuum it well before beginning the process of having it professionally cleaned. The most convenient way to have your rug cleaned is to hire Cleaning Services Riverside, CA.

Comment by Anjella Azad on June 9, 2020 at 1:10pm
It's not working! Why I can't find topologizer into the triangulation?

Where can I download Topologizer plugin for Rhino 6. Kind of stuck here without it

topologizer plugin is not working for rhino 6

Thank you for sharing

Hi, I encountered a problem while using topologizer. If I input a network of lines which all have duplicates, sometimes the component seems to do the crossing split before removing the duplicates, which results in a point being added in the middle of some lines (it crosses the line with its duplicate, I assume). It doesn't even happen to all lines, although they are all double. Has anyone encountered this issue?

hi,marty hogg,I had meet the same problem,the very short lines from Voronoi, I dont use Topolgiser to solve it, There is another way, I think the line is too short, that's not my wants, so. i just want the shortest line come to be as long as possible,there is a wonderful componets to help me,Galapagos.

Doesn't matter... I used scale instead of offset :)

I'm trying to use the Topologiser to merge together points in a Voronoi that create very short lines. This is often a problem when using the Exoskeleton because if you want a nice fat structure, the small lines get engulfed by the nodes so if you select a strut radius small enough for the short lines the structure ends up having relatively thin struts.

I've been using the method of offsetting the cells inwards, creating a mesh, thickening it and then weaverbirding it but the same problem occurs with the short lines where they can only tolerate a small offset before causing problems.

Is there a way to merge points that are within a set distance but reconstruct the new voronoi cells?

Could Kangaroo do this?

Does anyone know how the voronoi component creates the cells instead of just interconnecting all the points with lines?