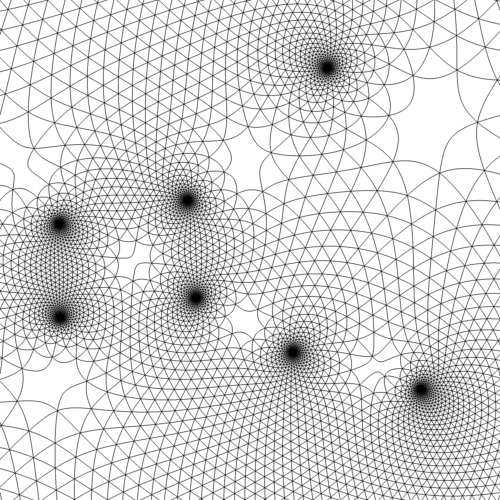 Around 3 years ago I wrote an essay on my blog about what I called rheotomic surfaces - a type of surface I had developed related to fluid flow and electrostatics, and a technique for their generation using complex numbers.

Since then I have received a lot of questions from people interested in the details of exactly how these surfaces and their associated curvilinear orthogonal grids were generated.

Now I've packaged it up into a Grasshopper object with an easy interface, and am releasing it publicly so anyone can experiment with this tool.

(See this video for an example of it in action)

When the idea of using the streamlines of a flow to generate a surface first occurred to me, I thought the way to go about this would be to integrate a 2d vector field from various seed points and then move these lines vertically and loft between them - but after a lot of head scratching and experimentation, I was amazed to discover that it is actually possible to skip that step altogether.

In this technique, the surface is generated first, by moving the points of a mesh vertically from the complex plane according to the scalar values of their real and imaginary components, to generate 2 separate meshes. One of these meshes gives the rheotomic surfaces described in my essay, with helicoid shaped regions near the sources and sinks, and its contours are the streamlines of the flow (hence the name). The other mesh has sharp funnel shaped regions, and its contours give the equipotentials of the flow, orthogonal to the streamlines.

One of the advantages this technique has over vector field integration methods is that there is no problem of choosing seed points for streamline placement, and nice even spacing happens automatically. We also avoid the difficulties with cumulative error common to such methods.

By multiplying by other complex factors it is also possible to generate lines at specific angles to the streamline/equipotential directions and create various grid types.

Also because of the mesh contouring technique, these are actual vector curves being created, not just pixel based mappings. 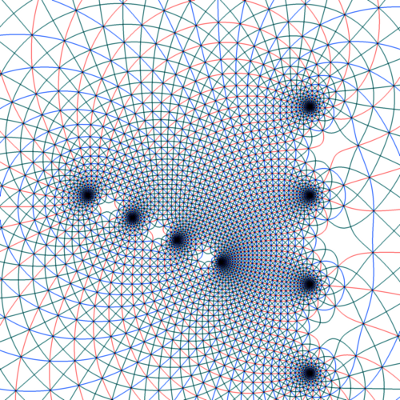 Because the complex logarithm function is multivalued, dealing with the mesh in a way that avoids a sudden jump at the branch cuts does require a bit of special treatment, and it is not quite a straightforward height map, but I found that it is possible to avoid the usual techniques for contouring a 3d scalar field.

This definition outputs both the curves and the meshes. The meshes produced are singly periodic - you can make copies vertically shifted by 2*Pi to get a continuously spiralling surface, and if you also shift them by 1*Pi you get the other half of the helicoids, and it can all be joined into a complete and smooth surface.

So enjoy, I hope you find some interesting and original ways of using and developing this. Please do remember to attribute properly - a lot of effort has gone into this, but I'm freely sharing it in the hope that will be respected.

I've chosen not to compile or obfuscate anything, so you can easily pull it apart and see how it is all working. The original essay linked to at the start contains some suggestions of further reading if you want to learn more about complex numbers and flows.

Hi , please help me solve this problem. what formula I have to use

I can 't find these pictures and model it like this.

please help me , friends. I need a lot of business with this algorithm.

Hi Panhao, I was wondering if you can guide me in creating the form of the image that you posted on the previous page. thank you

Sorry-- dumb question here- how did you create the animation at the bottom?

I'm trying to use this definition but alot of the components are flagged as OLD and I'm not getting any results for the flowline curves or mesh objects. Does anyone have a version that works with newer releases of grasshopper that they could share?

sorry for bothering. maybe i got the wrong impression, which is that the entire number of flowlines could become a continuous surface. however, i figured that depending on the number of sets of flowlines (input mode / Vectors) you create a branch each and rut it into the flat set of srf points, which creates a surface for each branch. how would they connect into a single surface?

thanks for sharing your ideas!

Just by opening the def I get the result on the picture. So I feed a mesh, from which I move certain points (z-axis) according to some fields.

What I would really wanted to know is whether I could feed 3 or 4 slabs (surfaces) for example one on top of the other and then define some points (including Z coordinate) that would start creating connections between the slabs. For example a point between the first 2 slabs would make a bridging between them, another point between the second 2 slabs etc but not so much in a surface bridging technique but rather in a rheotomic surface technique.

Thanks for sharing the amazing component. I wonder if there a new version to this component?

I'm trying to get to the circle packing pattern for the base grid for CA based agents. The problem is since the lines start from a square shape center they create redundant intersections. Is there a way to have circles in the center like Phyllotaxis?

Firstly I'd just like to say this definition is amazing and great fun to play with and thanks for sharing, I have been trying to understand the maths behind how it has has been put together with my aim is to see if it is possible to have an arrangement of sinks and sources at one level, smoothly transitioning into a different arrangement at the level below. If we were to say 'one level' constitutes the combination of the final mesh combined with it's equivalent shifted vertically by 2*pi then is it possible to smoothly shift to a different arrangement at the level below to avoid repetition of the same helicoid regions at all levels. I believe this could produce some really beautiful and interesting landscapes but not really sure where to start as there is some very complicated maths that I don't really understand, I have posted my broken down the definition with what I believe each area is doing and would be extremely grateful if anyone could point me in the right direction of achieving something as the result said above and also confirm I have understood the script correctly,  many thanks

i really appreciate if some body help me with that