By replacing straight beam elements under compression, with a series of fractal space frames (two tetrahedra on both end, and a stack of polyhedra in between) and distributing the initial compression force into tension and compression members of the space frame, R.S.Farr and Y.Mao succeeded in lowering down the amount of required material tens, several hundred times[1]. 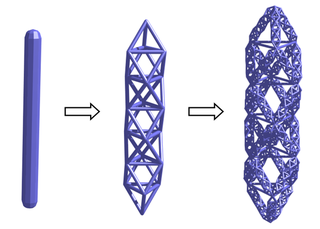 Critical Load Factors, for G1 structure on the verge of buckling failure

A generator for creating Generation 1 and Generation 2 structures based on upper mentioned papers, could be found below in two versions - Grasshopper component and Rhino button. On Generation 3 fractal space frames, they output only a report (force parameter, number of hierarchical octahedra, radii, number of members, its lengths ...) but do not generate it, as number of G3 frame members could reach couple of millions, billions.

Inputs: Length of the initial rod [in meters], compression Force [in kilonewtons], and Material.

a) grasshopper component:
Can generate both grasshopper geometry and bake it to Rhino to appropriate layers. Report in form of Grasshopper panel.

download it, and drop in onto your Rhino workspace.


Special thanks to R.S.Farr, for all the help gave me!

your grasshopper component and rhino tool for developing fractal space-frame is very interesting and useful for my thesis..!..i am going to use it ... thanks a lot.. !