Definition for the Deformation 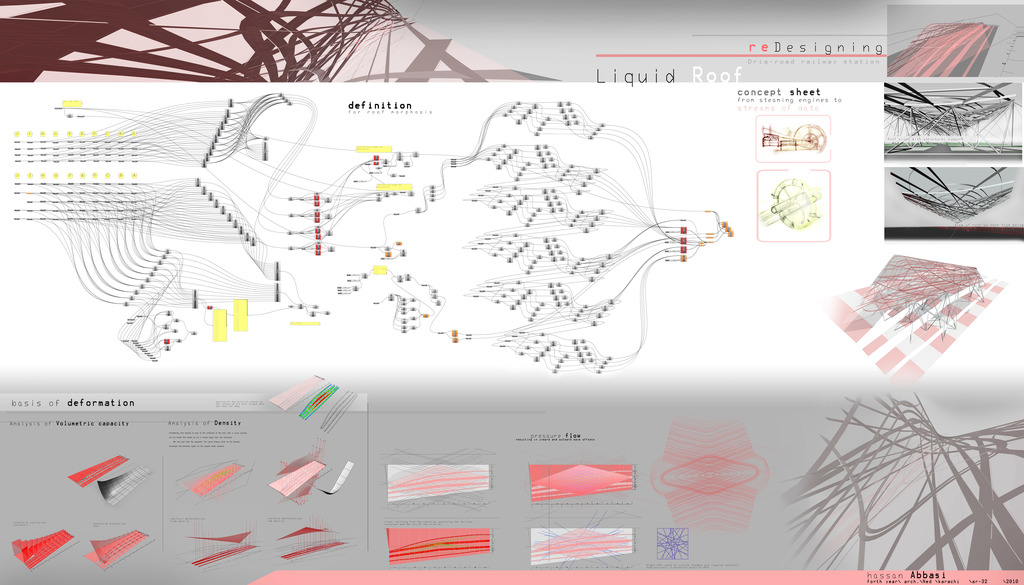 Our site was almost 1000 ft long, so i sliced it into 10 columns, 100 ft long each. 5 tracks passing along this patch further dividing it into more islands. i made a theory of islands and rivers, where people will behave same as if they are left in a plane with 5 rivers... supposing that the last row of island will be the least visited area.

Another supposition to create flow-curve was to place 1 person per 3 sq ft. and at a time all of them rushes to the center to catch the train, i know it sound insane but i dont wanted any random intuitive curves.

To make the roof mesh, i used the algorithms of Serpentine Pavilion 2000.

It is a superb choice for your family's free time. Here are some of the advantages of rattan sectional furniture. If you need to know even more about them, continue reading.wicker patio chairs

Thank you for helping people get the information they need. Great stuff as usual. Keep up the great work!!! Concrete batching plant

it was a wonderful chance to visit this kind of site and I am happy to know. thank you so much for giving us a chance to have this opportunity.. 뉴헤븐카지노

The website is looking bit flashy and it catches the visitors eyes. Design is pretty simple and a good user friendly interface. Pinoy Tv

Thanks for taking the time to discuss that, I feel strongly about this and so really like getting to know more on this kind of field. Do you mind updating your blog post with additional insight? It should be really useful for all of us. murcia golf property

Thanks for the blog post buddy! Keep them coming... Pinoy Lambingan

Thanks for the tips guys. They were all great. I have been having issues with being fat both mentally and physically. Thanks to you guys i have been showing improvements. Do post more. 먹튀검증업체

Your blog is too much amazing. I have found with ease what I was looking. Moreover, the content quality is awesome. Thanks for the nudge! dallas production company

Wow i can say that this is another great article as expected of this blog.Bookmarked this site.. The Small Business Blog

I definitely enjoying every little bit of it. It is a great website and nice share. I want to thank you. Good job! You guys do a great blog, and have some great contents. Keep up the good work. vendita steroidi italia