Over the last few days i have been working on a rather large contour map that was required to be segemented up to for the lazer cutter. It was easy enough to write the GH code for segementing the map and baking it to rhino to set layers as I have Mode Tools Plugin, but when it came to auto baking the Height Numbers out of GH that was a different story. On my travels though the forum I found parts of my over all plan but not one single system that did all i required. I did however find Mitch's Code http://www.grasshopper3d.com/forum/topics/text-curves-from-a-string... for converting Rhino text into single line crvs in Monkey. From here i went on the hunt for the knowledge and codes i need to get this input text into rhino using GH Inputs.

Below is the link to the VBscript that writes text to a given layer in Rhino using GH Inputs in GH6.59.
Must note i am just starting Scripting in VB all i did was edit/merge current scripts
Create Layer script was orginally written by Rajaa Issa (Thank you..hope you don't mind the edit)
And Text Bake script was from Rhino .NET SDK (Thanks to Damien for pointing that out)
Thanks Mitch for the Final Code for Single Crv Text in Monkey 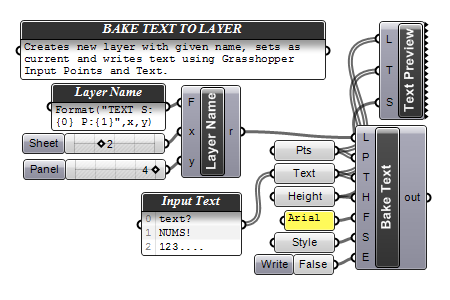 Had a look at the code, and it seems at the time i was using On3dpoint and not OnPlane so you text would always bake flat, i have been able to edit this so it works with input planes but as the code is so old i am now getting errors as it was written pre-Rhino Common for Rhino V4.

I should be able to update the code later, but you maybe better off using Elefront plug-in that has an option to create text that can be baked with their bake component.

Hi, thanks for the great script. It works really fine for straight text objects. Currently I´ve got some rotated one and wanted to bake them as well, but these come out straight, too :(
Does anyone know how to bake rotated text, as well?

This is the solution I neded, thank you for sharing!

This was incredibly helpful.  Exactly what I needed.  Thank you very much for sharing!

Comment by Christoph Schindler on October 8, 2010 at 8:45am
This is just what I was looking for–