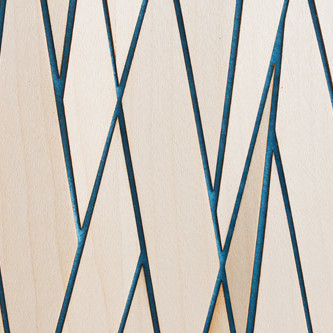 i think you can do it by swapping input circle with line. and slight modification of the graph. Not sure it would work or not. but you can use this as reference. I will try to do it later. I am a bit swamped work. thanks. :)

thanks for appreciating my work. I have looked into what you asked. I got a way. entwined%20sheet.gh I guess this will for for such case. I have done it in a hurry so there might be some errors. But you will get the idea. Let me know if it worked for you.

Ok, since at the photo it doesn't work, I'll try it here:

In attachment you can find the grasshopper definition I used to make the 3D texture. The rhino file I used to actually make it on the cnc-machine appears to be to big for uploading here.

After making the square which the definition does, I trimmed the curves to a circular shape. I then used these curves to generate the gcode to run the cnc-machine. And because I was using the ballnose (with the zero point in the z-height on the bottom of the ballnose), I ended up with this pattern which is a bit more pointy then the originally generated surface. A way to work around that would be to offset the surface by the radius of the diameter and project new curves on top of that to use for the milling.