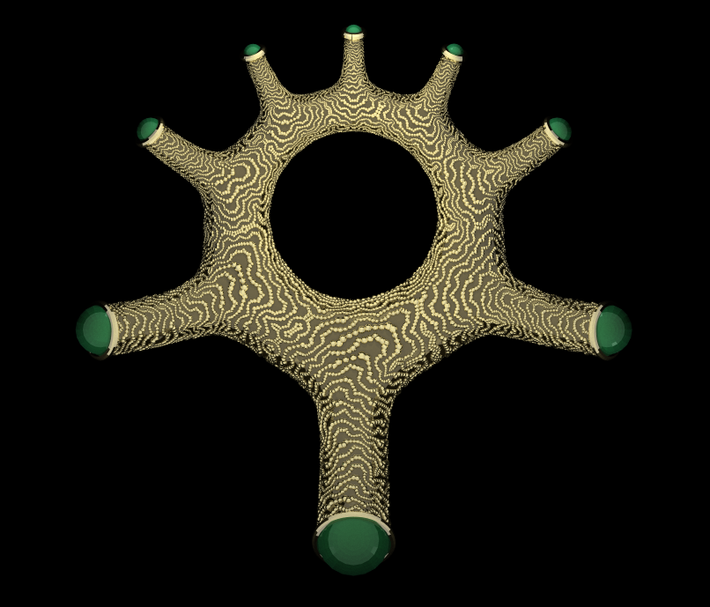 Nik, inversion is a geometric construction that takes a point outside(inside) a circle and maps it to a point inside(outside) the circle. Let's say the circle has radius R and center at O, the original point is at P, and the new point is P'. The following holds: OP*OP' = R^2. Generally, a circle will get mapped to another circle and a line will also get mapped to circle. The transform carries over into 3D using a sphere instead.

If I had left my initial torus a torus and inverted it, I would have gotten a Dupin cyclide. Since a torus is generated by circles, the curvature lines of the cyclide are also circles.

Hi Daniel, thanks for your interest.

To answer your questions:

Very insightful, it's the Sumerian god of bottle-openers, based on recent archaeological evidence.

The texture is courtesy of David Mans' Mesh+ 2.0 face-band component, which divides mesh faces, ranked on topological distance to naked edges (eight here). In his demo, David uses color to discriminate between bands. I took the list of faces and constructed spheres on alternating bands. The radius of each sphere is a factor times the sqrt(Area) of the face. I also matted and slightly darkened the gold of the base in the rendering to increase the contrast with the spheres. I suppose, in "real life" this could be accomplished with either lacquer, patina or enamel.

The shape begins as a torus in TSplines, but since the next step is Daniel Piker's Mesh Machine, it could probably have all been done in Rhino anyway. The torus is drawn out into eight identical arms, open at the ends. After some tweaking, Mesh Machine provides a nice, non-uniform mesh. Then, if you're not already asleep, the mesh is inverted in a sphere. An inversion transform preserves circles, which is why the shape still retains some circular aspects but everything is deformed in a consistent way. Catmull-Clark to further subdivide, then the face-band approach from above.

Can you explain what is it? I like the shape, its like spiritual or mystical or something, but this texture??