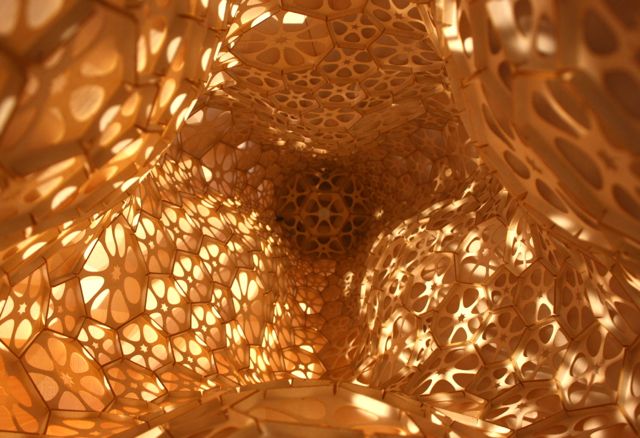 Great to see it from this point of vue !

Hey, would you mind sending me the grasshopper file of it? I am taking Gwyllim's class of grasshopper, and he is very interested in this one, and wants me to research on this style. Thanks a lot. My email is s3412168@student.rmit.edu.au .I really like your project

How do you used " Python" in this project?

Can you explain it? this pattern can be created by rhino grasshopper.

SO BADDASS!!! Super impressed. Keep up the good work Andrew!

@Rasmus: I'm not sure what you mean by "download the link". If you want a copy of the photo, can't you just right-click and "save image as"? To answer your question about the 360 degrees: If the sum of the angles of that meet at a vertex are anything but 360 degrees that means that the faces around that vertex cannot be unfolded flat without introducing a seam. I wanted to avoid adding extra seams so I calculated the location along a surface normal that would allow the face angle sums at the centroid of each plate to equal 360. See this diagram on my website: http://matsysdesign.com/wp-content/uploads/2012/04/Chrysalis_III_Pl...

@Roman: Yes, this is an art object that was commissioned by an art museum.

Great project - I could'nt download the link on the page though.

Nevertheless why do you wanna have the sum of angels in the plate to be 360? And what was your parameters or algorithm for optimizing the cell organisation?

great cocoon, but it is used just like a piece of art?

- Python: The inner plates at the base of each cell are non-planer but I wanted to cut them from planer material without any seams. I used python to search along a surface normal vector at the center point of each cell for a particular point where the triangles that make up the base plate would sum to 360 degrees. Any sum other than 360 would result in a seam.

- Lunchbox: Simply Baking the geometry to the Rhino file in a ordered way. Each object had a unique name so that I could look it up later during assembly if needed.

- Rhinoscript: Very small usage. I only used a script I wrote to convert text objects to single-stroke fonts for faster laser cutting.

what was "python, lunchbox, rhinoscript" used for ?