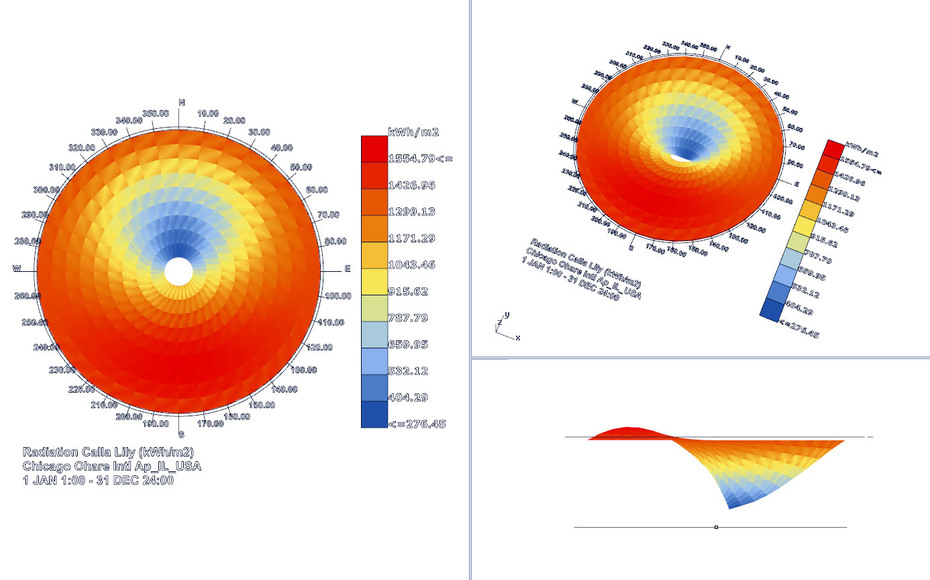 That would be great! You may also want to send me a link to your video so I can upload it on the Facebook page.

Correct! Input 0 as vertical scale and you will get a 2D Lily.

What I can see in your analysis does not look right. I sent you my email so you can send me the file.

Context represents any surface that you want to be considered in the study only as an obstruction/ shading.

Ok.. I think I understand

With the Rose it was just what I was thinking... now with the CallaLily I have a question.  The form of the Lily doesn't change. Is this correct? So the form stays the same and the colors on each of the surfaces changes to show you what angle and orientation your are getting the most radiation or the least radiation and everything inbetween... Is this correct?

Also, I have a few questions about the Radiation Analysis... I am trying to use it to understand which parts of my building are getting the most radiation.  Would it be correct to use it for this?.. Also, I read in another post on the Ladybug page about how someone had problems with single surfaces so they gave them thinkness to correct the problem of getting the right readings.  I have had something similar happen and was wondering if having all the surfaces joined or not had an affect?  It seems it has for me.  I also get wrong (and when I say wrong I mean 0) readings when I input a lot of surfaces compared to few.  Is there a limit that the component can handle?... Lastly, I haven't figured out what the "Context" input is.  Maybe this is partly to do with my other problems.... 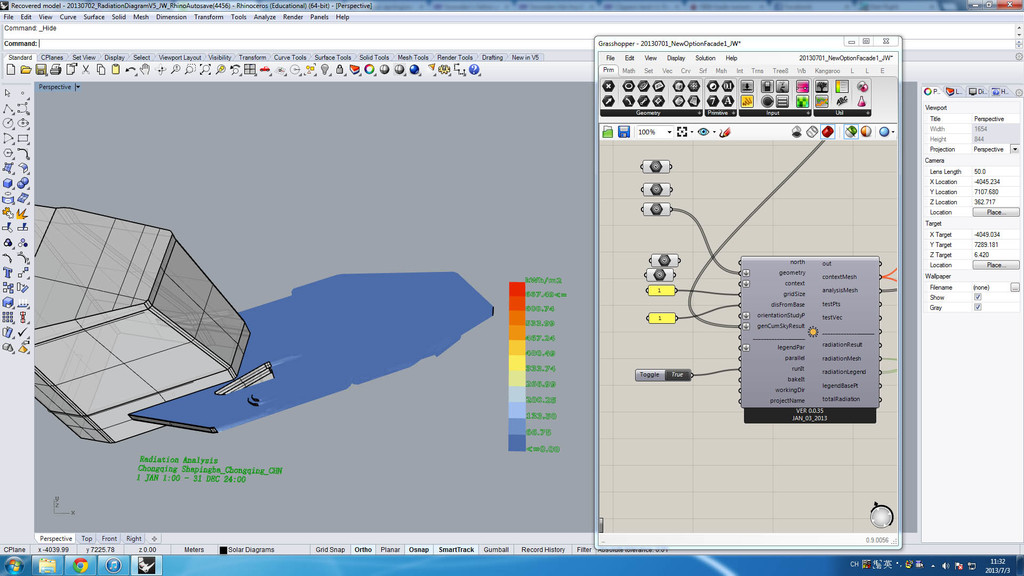 I can send you the files if you would like to look at them.

That makes sense! Unfortunately I never had the time to provide some explanations for the diagrams. The best way is probably to capture a video but let me try to give you an explanation for now as it usually takes me so long to record a video.

RadiationRose is a diagram similar to windRose (but for radiation)! It shows the amount of radiation that comes from different directions. The longer the arrow is the more radiation comes form that direction. The default diagram is for a vertical surface but you can change the angle to explore the amount of radiation for a tilted surface. This is most useful when you want make a decision about the optimum building orientation based on radiation. That's why I plot the radiation rose for cooling period versus the heating period in the example file.

Now imagine if you want to see the amount of radiation from different directions and for different tilts all at once. That is what Radiation CallaLily is trying to do. So you can see how much radiation a surface receives from each orientation and with a different tilt angle. It is most useful when you want to make a decision about the orientation and the tilt of the PVs for example. It is also a good diagram to communicate with the client and the team about the relationship between the form and the radiation!

Mostapha, first and foremost.. I just want to say how much I love Ladybug!! I have been using it for sun vector angles on a mechanized facade system I am designing.. great work man!!!

I was a little interested in these Radiation diagrams though (Calla Lily and Rose) and unfortunately I don't really know how to read them or what they are telling me... is there any descriptions of these so that I can better understand them and would further more be able to have them help me in my design?

Thanks as always,
Jason