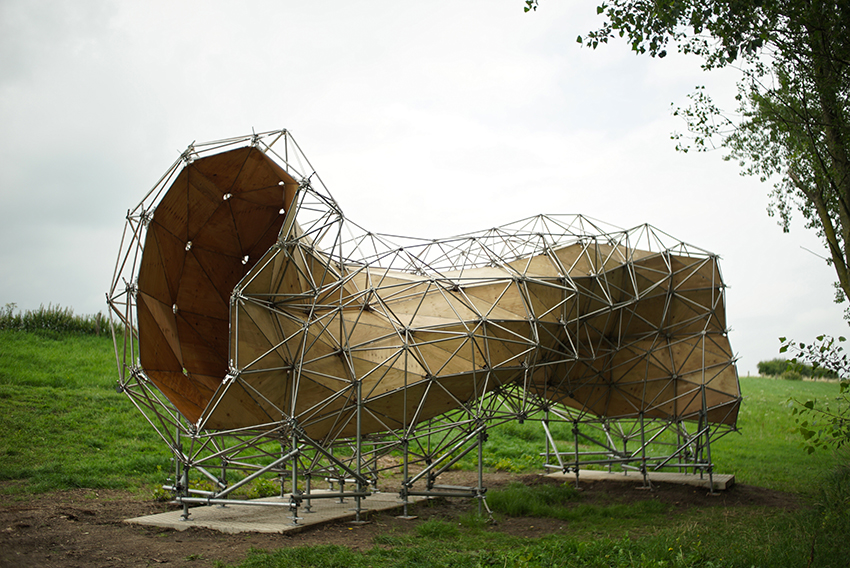 510, an installation by Jasper Niens.
Based on 1/10 of the innershape of the Wendelstein 7x.
It's a irregular spaceframe build, node design, definition and production courtesy of the artist.
7000 unique parts.
Material: Stainless steel, Plywood (larch/pine)

Thanks for the explanation! Yes it made sense... just! The fact you somehow managed all these pieces and assembled them in the right places is as impressive as the design.

Thanks Martyn ! Let me try to expand, it's late and I might be rambling and incoherent but here goes: The node design took me quite some time to get it right but the key is in the vertex normals of a given mesh (or rather a meshed base-surface to be exact). The collision detection and exceptions made it more complex but most of all: I wanted to have a flat production set-up, 2.5D, for the nodes to be economically viable. The general idea is this: rings with notches (hold together by a central bolt) clamp the various angled pieces that are in turn pinned to the tubes (which are themselves cut with a cnc tubelaser). This meant I had to deconstruct the 'zero' of the spaceframe logic (standard quad based) into planes in order to use the flatbed laser for the nodes. It's a very strong structure really, I did calculate the forces beforehand but to feel it's strength was great. You can walk in it, on it, everything: nada de movimiento. The interior skin of wood is an adaptation of the same tubular structure I made last year but that one was fitted with a PVC membrane (I found it a very interesting and deep field, still a lot to learn: minimal surface and generation of cutting patterns). For the wooden skin to work, now of course triangular, I had to add an extra layer which does go to zero but on different heights on the central bolt to avoid collisions. Please notice the sphere cut holes in the wood to allow for thickness and connection. I hope I make any sense.

Awesome! How did you make the nodes?