The examples below demonstrate the usage of the different features of karamba. They require Grasshopper 0.9.006 and karamba 1.0.0.

Examples for more current versions of Grasshopper can be found at www.karamba3d.com/category/examples/. 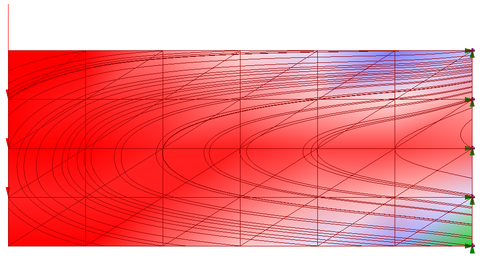 Shape optimization of a shell with Galapagos: The z-coordinates of points on the boundary of a shell are optimized so that the maximum deflection under the given point loads is a minimum. Requires MeshEdit from [uto] tools Plug-ins. 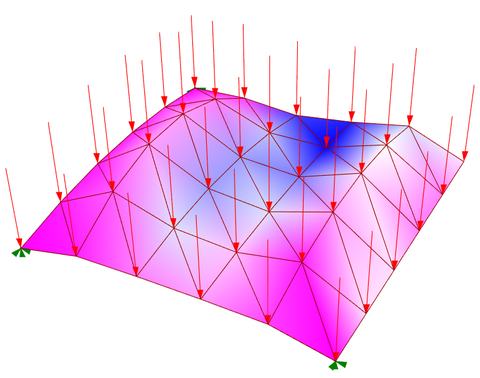 Optimize shape of Tower: The shape of a tower made up of shell elements is optimized for minimum deflection. The picture shows material utilization plus force flow lines. 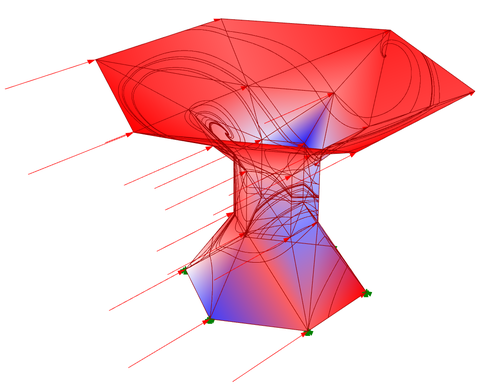 Informed geometry I: Shows how to scale the size of openings in a structure depending on internal forces. 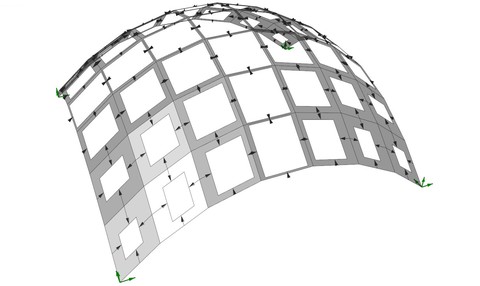 Formfinding I: Creation of shapes via large deformation analysis. Lets you vary the support locations. 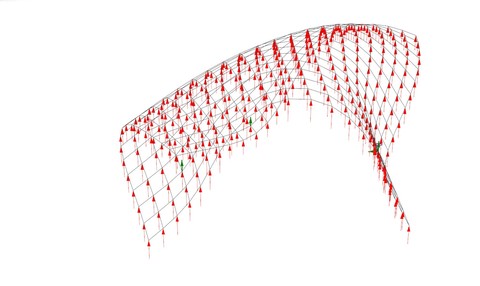 Formfinding II: Variable bending stiffness in the grid of beams can be used to fine-tune the resulting shape. Eigenmodes: Lets you explore the eigenmodes of a rectangular grid of beams. Optimization of support conditions: This definition uses Galapagos to find the support positions for the minimum deflection of a rectangular grid of beams. 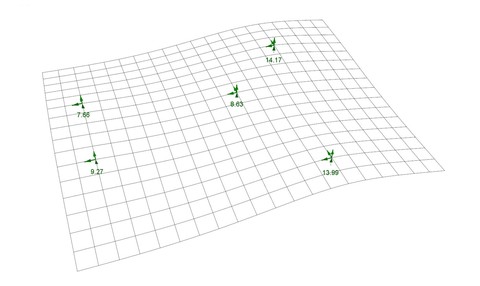 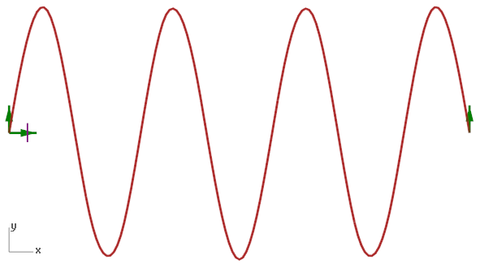 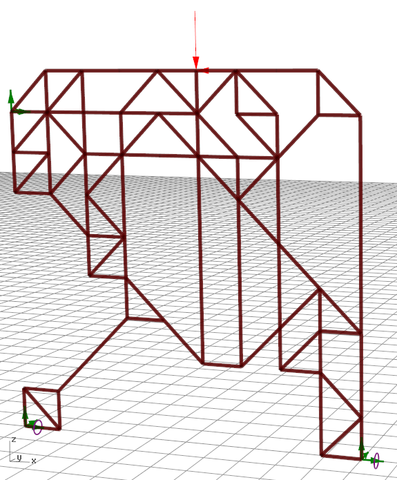 Force flow in structures: by reducing a structure to those elements that carry most of the external loads one can use the flow of internal forces for form-finding and topology optimization. 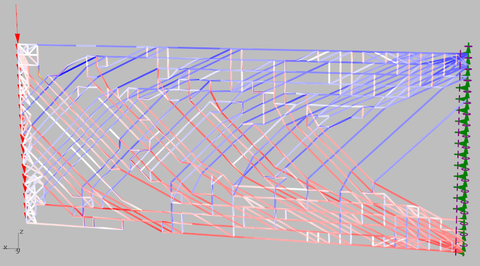 Locally oriented supports: Example of a simply supported beam under a uniform line load with supports that can be arbitrarily rotated. 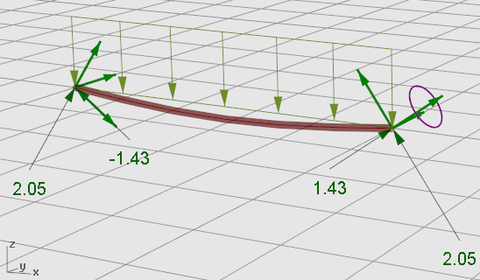 Hinges on beams: Beams can have hinges at their endpoints. This definition shows a beam with fixed supports on both ends under dead-weight. A transverse shear joint is defined at its right node.

Beam with eccentricity: This example shows a beam under axial compression. Its eccentricity with respect to the connecting line of the endpoints causes bending.The faint, light blue lines at the beams endpoints symbolise eccentricitites which are rigid in the calculation.

Catenary: Karamba can handle large deflections. An initially straight, slender beam deflects under a globally oriented line load. Change the orientation of the load in order to generate a pneumatic shape. Comparison with the results obtained with Grasshoppers 'Catenary'-component shows good correspondence. Minimal surface: large deflection analysis in connection with a pre-tension load can be used to approximate the behavior of soap-films. Pneumatic shape: another example of large deflection analysis, this time driven by point-loads generated with the 'MeshLoad'-component. The point-loads co-rotate with the nodes they act on and thus simulate air pressure. 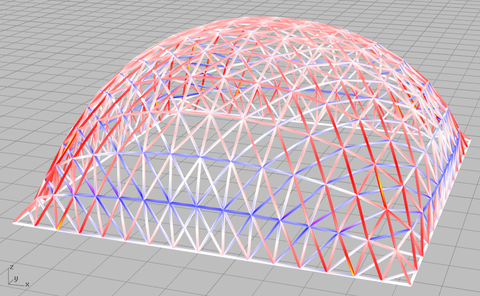 Cantilever: Shows the five basic steps to get a working karamba model. 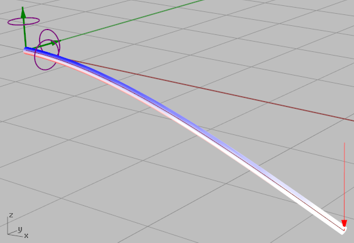 Single span beam: A point load wanders over a beam. Each position is a separate load case. 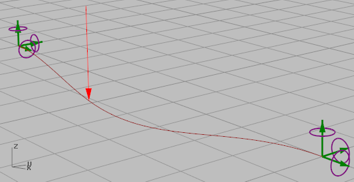 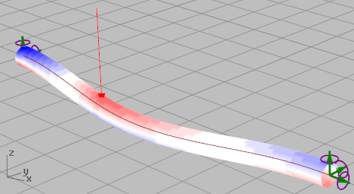 Optimize the cross sections of a beam: A tiny C# script can be used to determine the optimum cross section geometry. It works for bending moments and normal force.

Strains in a single span truss: This definition shows how to assign different cross sections to different parts of a model and how to add a structures dead weight.

Shape optimization with Galapagos I: What is the optimum height of an arc so that its deflection under a series of equal point loads is a minimum? 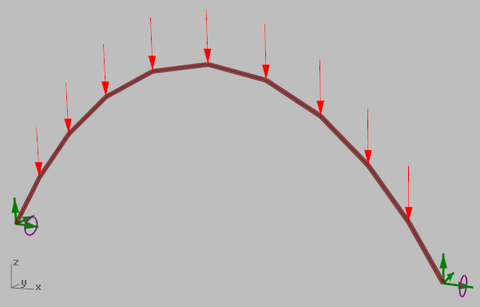 Shape optimization with Galapagos II: A cupola with external, vertical loads and variable diameters along its height is given. Galapagos finds the shape which renders the minimum deflection. 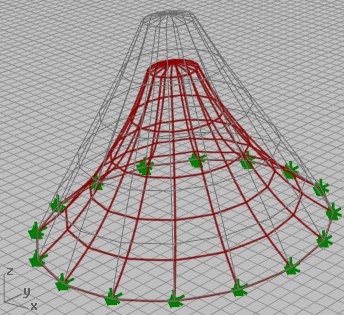 Shape optimization with Galapagos III: A tower with horizontal loads and variable diameter along its height is optimized for minimum deflection using Galapagos. The shape below is not the optimum. 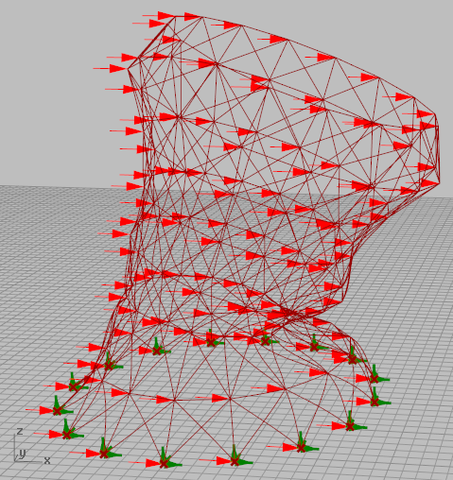 Shape optimization with Galapagos V: This definitions uses the  NearestNeighbor-component to generate structures from random point clouds. The optimization of the pointcloud is done with Galapagos. It might take a while before the solution converges. 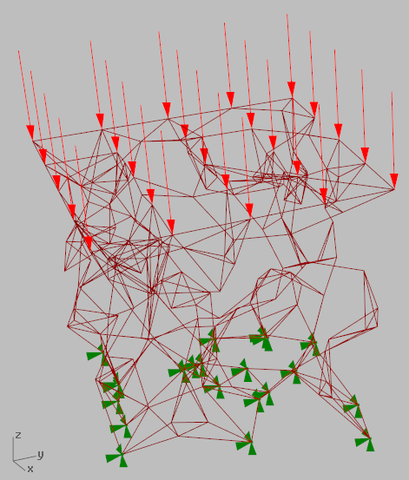 Bracing walls: This definition shows the effect of the orientation (which can be changed arbitrarily) of three or four walls on their effectiveness as bracing elements for horizontal loads on a floor plate. There are two load cases: wind in X and Y-direction. A trick is used to display always the load-case which causes the largest deflection. The green areas represent the beams bending moments about their local Y-axis.

Cable-stayed bridge: Like the above bridge but with different cable layout.

High rise systems: shows the effect of different kinds of horizontal bracing types. Feel free to alter the number of bays and storeys.

Eigenmodes of a drum: the skin of a drum is approximated by a quad mesh. The eigenforms correspond to its modes of vibration. 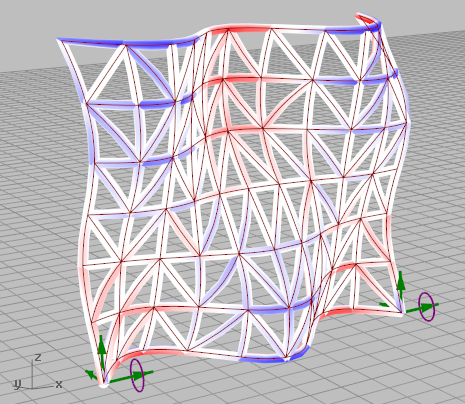 Using Horster: demonstration of how to use Horster in connection with Karamba. You need to have Horster Tools installed. The basic configuration consists of a roof under a uniform load (realized with a MeshLoad-component). You can add connections in Rhino (purple Layer). Recompute the definition when finished (right click on definition, context menu in the middle). Karamba will optimize the cross sections and immediately return the resulting mass of the structure. You can choose between cantilever and simply supported conditions. 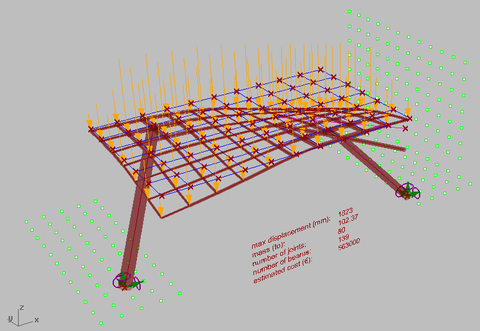 Portal frame: this example shows that supports have a significant impact on a structures deflection. 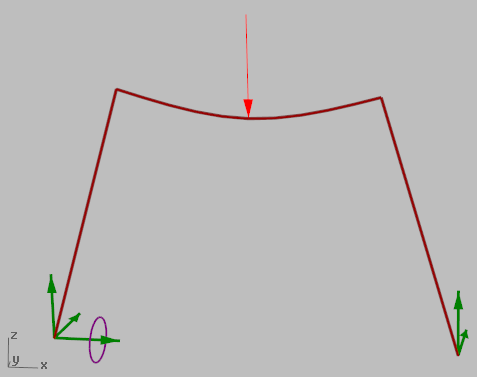 Truck on bridge: A truck moves over a bridge. It is simulated using the MeshLoad-component. Enable the EigenModes-section to see how the bridge would vibrate.

You need to be a member of Karamba3D to add comments!