What does this mean and how to I fix this...I am running rhino 4.0 sr9 this is a typical sign of not having the last update of the runtime.

Note that you need the most recent Microsoft Runtimes to be able to load Grasshopper in Rhino4. You can download the latest runtimes from the Microsoft Website, and be sure to get the 32-bit ones (vcredist_x86.EXE).

I hope this helps,

Permalink Reply by Thomas Bett on August 31, 2011 at 9:56am
Ok well I have done that but it still has the same error message

I'm sorry, but there is no solution off the manual then.

Can you try making the error appear again and then send a screenshot of the log to my email address below, please?

1) Go to the Control Panel, then choose View event log: You should be able to spot the error in the viewer: 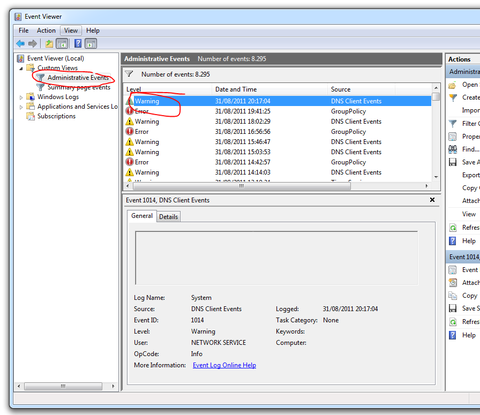 Thanks for everyone that helped me figure this out

This is a bad problem. It refers to problems with the WINSXS (Windows Side-by-Side) subdirectory in your main Windows directory. The problem has nothing (directly) to do with Rhino or Ghrashopper at all.

What it does have to do with is an ancient and basically fundamental design problem with Windows itself. This problem is typically called "DLL Hell". In the beginning ((Windows 2) when RAM was expensive and scarce, MS enabled Windows programs to use many different small modules that were loaded dynamically (DLL = Dynamic Link Library) as needed.  It quickly became common practice for different programs to use the same DLL file to do the same thing.

But nasty problems happened when Program A updated a DLL in a way the caused Program B, which used the same DLL, to crash. MS spent literally thousands of support hours resolving these problems. That was very expensive.

So starting with Windows 7 (I think) Microsoft tried to reduce this kind of issue by establishing the WINSXS directory. It's purpose is to store all the versions of a DLL file used by different programs.  It also has internal links so that different programs references to a given DLL are mapped to the copy of that DLL Windows has saved in WINSXS for each application.  This keeps all the same-named DLLs separate and lets each program use it's own copy.

That's the theory, and it works OK as long as everything with WINSXS is OK.  But - if somethings goes wrong with WINSXS, then the program can't find the DLL it needs, and you get the "Windows Side-by-Side" error message. This prevents the program from running.

There are no tools for dealing with WINSXS. The best method I know of to fix WINSXS problems is to completely uninstall the failing program and reinstall it. This either will work, or it won't. If it fails to work you can try restoring from a prior Restore Point. If that fails you will probably have to reinstall Windows and start over with reinstalling all your software.

Remember, I said it was a bad problem.

There is another issue with WINSXS that gets little attention, and that is that it gets larger every time you install a program. This is because Windows does not do a good job of removing things from WINSXS. It seems that with WIN 8/10 MS has improved this slightly, but WINSXS will still get increasingly large over time.

This means that at some point it will either fail in some way or consume all the space on your boot disk.  So a good idea is to do a complete boot disk reformat/Windows reinstall every few years.