Would anyone have an idea on how I should analyse a simple rectangular PV panel that is rotating along the sun path? 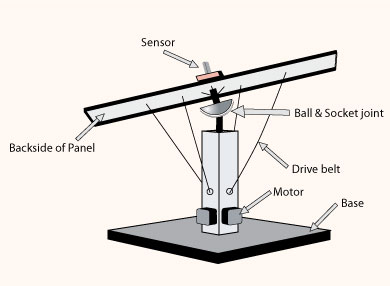 I assume you already know it, but just for the sake of other questions which may appear:
Ladybug Photovoltaics components support only fixed tilt-azimuth PV systems.

Indeed I am aware that it is only for fixed tilt-azimuth PV systems.

However, would you have any suggestions of how to make the addition of the yearly energy output of the same panel at different orientations throughout the day, following the sun path? To make it not too complicated, not by adjusting the tilt and azimuth simultaneously, but only the tilt.

I have but I wouldn't suggest it, as I do not think it will be correct.

Any suggestion is welcome djordje, even if it is an approximation :)

Of course, if this is not too time consuming for you...

Would the panel be in a constant angle to the sun rays throughout the day?

I really don't know a lot about rotating panels and their operative characteristics, but if you could assume that the mechanism is able to work in such a way that the panel always retains a (optimum) angle to the incoming solar radiation then the problem really becomes a series of hourly solar radiation simulations with that specific tilt/azimuth.

You could set up smth like this with native GH components and/or the fly! HB component.

Not sure it makes sense though, others more experienced can add ideas perhaps.

Thank you Theodoros for you reply.

It was about standard sized solar panels on a hyperbolic paraboloid.

In the end I made the following approximations:

Discretization of Sun Vectors (rotation analysis)
•Half of daytime (as it is symmetrical towards N-S axis)
•1 sun vector per hour (6 in total)
•On September 21st/ March 21st (as it is the average of the summer and winter solstice and it occurs twice a year)
•Average vector of panel’s normal vectors is oriented in between two adjacent sun vectors (e.g. average normal vector between 7am-8am)
There's a screenshot and the .gh file below. The file takes quite a long time to load though and you will have to zoom out quite a bit as well.
What can the fly do that could make it easier? I'm not familiar with it.
How would you have approached it with native GH components?