1. The fix was necessary because my component (and presumably fabtools as well) is tuned into object-level attributes, not layer-level attributes. For many attributes (material, color, etc) each object has a "Source" property (layer, parent, object) - my fix causes it to look at this source property in order to determine where to draw the plot width value from. I was already doing this for color and material, but had neglected to do it for plot width.

2. The "Print Preview" viewport display option is calling the "PrintDisplay" command in Rhino, which you will notice takes a "Thickness" value - this is the conversion factor between plot weights/print widths (in mm) and the number of pixels in absolute screen width. As you note, this is a relative and not an absolute width in model units, so it does not change when you zoom. In most design applications it would be quite strange to specify the print widths of your geometry in absolute units - e.g. setting your lines to be 50 ft thick. In illustrator you are always working in "Paper Space" whereas in Rhino you have to be aware of the differences between Model Space and Paper Space (or Layout Space in Rhino terminology.)

My lineweight preview component operates on the basis of pixels - if you tell it "2" it will display a 2px-wide line irrespective of your zoom. The 4x conversion ratio you note is purely a function of the setting of your PrintDisplay command in Rhino.

3. The good news is my custom preview component ALSO supports "Absolute" lineweights in world-space units - so that they create a line that gets fatter when you zoom in and thinner when you zoom out (though it can't get thinner than a pixel, naturally.) Set the "Absolute" toggle (the 4th option" on the component - I think it will create the "Illustrator-like" behavior you're looking for, without having to create surfaces from your lines.

4. The dynamic pipeline component updates when the by-object plot weight changes. It does not update when the layer-level plot weight changes. In the end I have had to make some judgment calls about what kinds of changes should trigger a component refresh: too sensitive, and a definition could be forced to recompute unnecessarily on every little change; too insensitive, and you require too many forced refreshes.

With this approach, you may have to match up your geometry to the layers it belongs to, and then use the layer table component to retrieve the plot weight settings. The definition shown below is an example of how to do this. It assumes you are using layer-level plot weights.

I found how to create line width screen graphics directly from Python, in screen sizes, not geometry sizes:

So I would then need to acquire the zoom state of the viewport in order to adjust the thickness. Ugh.

I found how to create line width screen graphics directly from Python, in screen sizes, not geometry sizes:

So I would then need to acquire the zoom state of the viewport in order to adjust the thickness. Ugh.

Permalink Reply by Andrew Heumann on January 12, 2016 at 8:02pm
Yes, my "absolute" option for the line weight preview as described in my last reply does essentially that.

Fantastic. I guess I forgot absolute lineweight previews worked after I upgraded to the new version with default settings.

I'm still having to use the FabTools GetObjectAttributes component as well though, to obtain not just the layer color assigned to objects but also the Print Color.

Sounds obscure, except I want layer/assigned color to be my Illustrator-like fill color, however I might eventually preview that, say as a Python exported SVG file for the web, but then use the second color setting of Print Color ("Plot" Color) as the line color.

FabTools offers both colors. Please add this too so I can stick to your single plug-in for this overall feature!

If you can muster some sort of flat closed curve area fill custom preview, that would be rather useful. Using meshes or surfaces gives lots of moire artifacts where they overlap in 2D.

As for flat/closed area fill - the closest equivalent to this in Rhino is a hatch. However, you will find that planar surfaces, planar meshes, and hatches all rely on the same routines - and thus are likely to result in the same moire artifacts.

I'm also suffering the fact that colors come through both as RGB lists of three values and yet also as specific names like Black or SeaGreen that a normal user will definitely be using since those are the defaults in the color picker.

I need a converter for the named colors or my Python scripts will fail.

I see there's a system colors file for Rhino:

Found how to get rid of color names in favor of all RGB values, via the Display > Color components:

I did have to right click ARGB to switch from floating to integer input. 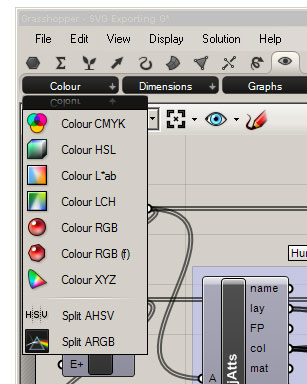 Hi Nik - the colors I'm passing out are of type "Color". They are no different than any other color in Grasshopper. You do not need a converter. If you want to use them in a python component merely set the type hint for that input to "color".

In fact on further investigation the type hint should not be necessary. Even the colors which render as a string name (e.g. "DarkBlue") come into python correctly with no typehint, as evidenced by the fact that you can call their properties. Lack of a user manual keeps frustrating and then delighting me. The x.R trick is just glorious. Where is that documented?! There's no .R pop-up menu hint if I type x. in the Python editor, obviously.

I see it used when I follow a Color link in the Rhinocommon reference document, as being part of .NET:

I had only seen use of .x, .y, and .z to grab the components of a Rhino point, but saw no examples of using .R, .G and .B to get color values. 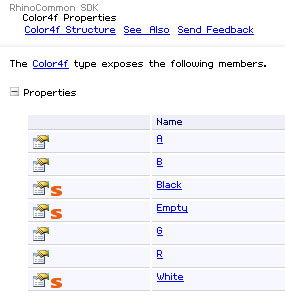